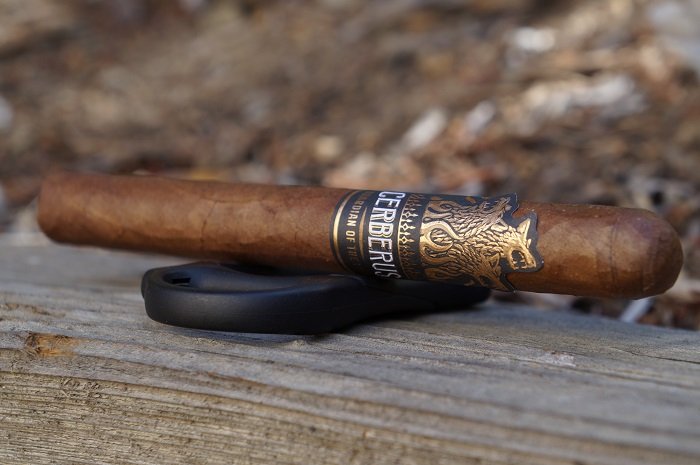 Aaron: The wrapper on the Aganorsa Leaf Guardian of the Farm Cerberus Lonsdale is between light and medium brown and has a network of lightly raised veins. The seams are slightly raised while the caps are very well applied. The band is black, gold and white and has the line and sub line name on the front with a multi-headed dog and the company and country of origin on the sides of the band. The aroma from the wrapper is a mix of wood and cocoa powder while the foot brings sweet wood. The pre-light draw brings sweet cedar and breadiness along with a mild spiciness on my lips.
Seth: I used to think these AGANORSA wrappers looked antique, and I loved the faded coloring with the tobacco veins, but I will be honest in saying that I think they look like actual garbage now. Marbled in coloring, the Aganorsa Leaf Guardian of the Farm Cerberus Lonsdale has some light Colorado to Maduro colors. The triple cap is applied well and the wrapper itself is silky in texture. Aromas of rich earth, peppery spices, leather and tobacco.
John: The Aganorsa Leaf Guardian of the Farm Cerberus Lonsdale comes in cellophane, and has a UPC sticker that is attached to the main cellophane body so it remains intact when opened. The cigar has a single band, and aromas from the wrapper included intense bread with fresh cedar undertones. From the foot, I was picking up on sweet raisin and tobacco.
Jiunn: The Aganorsa Leaf Guardian of the Farm Cerberus Lonsdale has a nice oily sheen to the overall Colorado wrapper shade. Veins are well pressed, seams tight, bunch and roll slightly lumpy and head well wrapped. Aromas from the wrapper tell barnyard, cedar and a hint of white pepper spice. Aromas from the foot tell more expressive white pepper and cedar. Cold draws reveal primarily cedar. 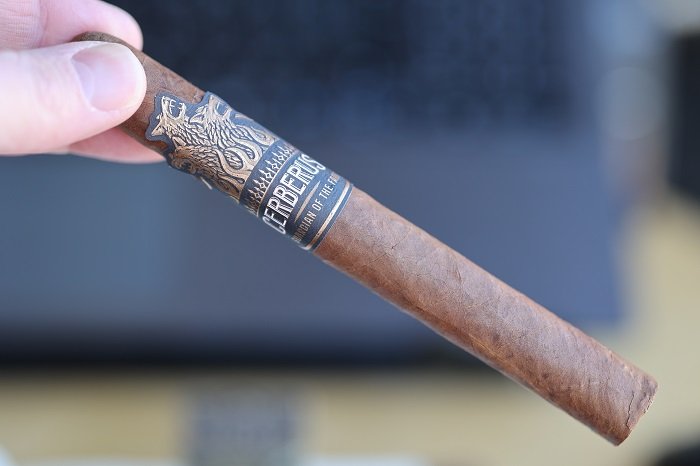 Aaron: The cigar begins with toasted cedar and bold baking spice. At a quarter inch in, some dry earth joins the profile. At three quarters of an inch in, the toasted cedar and dry earth are even up front with the baking spice right behind. The retrohale is a mirror image of this same profile. At an inch and a quarter, the baking spice begins to mellow. As the third comes to a close, the toasted cedar and dry earth are even up front with the baking spice a bit behind. The strength in this third was slightly above medium.
Seth: The first third starts out by delivering some leather, spice and earth notes. I am getting some cinnamon, pepper and nutmeg. Dried toast with cocoa powder present as well. Medium to medium-full in strength and body.
John: Light bread gets thing started, as some nutmeg and cinnamon are present through the retrohale. Light cedar and earth complete the finish, with earth lingering into the post draw. As it settles in, mild wood moves into the middle of the profile. As it progresses, cinnamon is lingering on the post draw. The profile becomes more wood forward as it progresses.
Jiunn: The first third has the backbones of what good Aganorsa corojo is, but it’s unfortunately muted. There’s cedar, sweet bread, pastries and dry red pepper spice, but these notes should be more pronounced. Retrohaling doesn’t necessarily help with that, as the flavor complexities diminish to mainly dry red pepper spice and cedar. The finish shows a mixture of toasted cedar and pastries. Strength and body is medium. 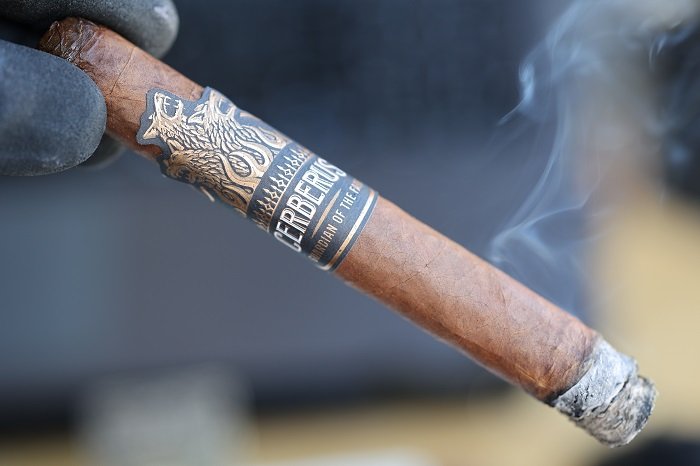 Aaron: As the second third begins, the dry earth takes a slight lead over the toasted cedar. At a half inch in, the baking spice has morphed into a dull black pepper, the cedar has transitioned to oak and the overall profile has become a bit dry. The retrohale has dry earth slightly ahead of the toasted oak with a mild, dull black pepper in the background. As the third comes to a close, the profile remains dry earth slightly ahead of the toasted oak with dull black pepper in the background. The strength remained at slightly above medium.
Seth: The second third delivers a similar profile from before. I am picking up some cinnamon and leather notes that are paired with pepper and earth on the finish. Hints of cocoa and toast as well. Medium to medium-full in strength and body.
John: The profile is wood forward leading into the second third. There is a dryness carrying into the post draw after a few puffs. Some bread is present on the retrohale, somewhat under the wood. I would describe the initial profile here as quite light, and not as complex as I would like. As the cigar continues, earth returns at the end of the draw, carrying into the post draw. By the halfway point, earth dominates the post draw between each puff.
Jiunn: The second third shows greater dry red pepper spice influence. But this influence doesn’t meld well with the overall still muted flavors of cedar, sweet bread and pastries. The finish is also “dirtier”, showing increased spice, gritty dirt and minerals. Strength and body remains medium. 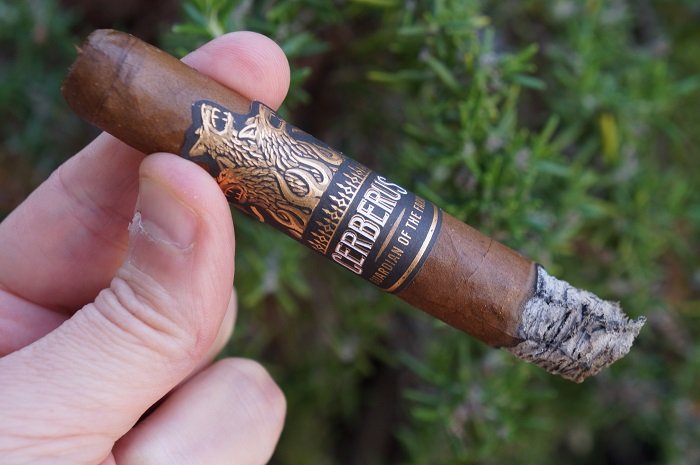 Aaron: As the final third begins, the toast on the oak becomes pretty heavy. At a half inch in, the toasted oak now takes a slight lead over the dry earth. The retrohale is now an even mix of toasted oak and dry earth with mild, dull black pepper. At an inch in, a light vegetal note joins the profile. As the cigar comes to a close, the toasted oak maintains a slight lead over the dry earth with a vegetal note a bit behind and dull black pepper in the background. The strength bumped up to medium-full.
Seth: While the cigar showed no improvement in the final third, it also continued to perform at the level which it had for the first two thirds. I was picking up those similar qualities from before of cinnamon, leather, pepper, cocoa and earth. Medium to medium-full in strength and body.
John: Earth and wood combine here with citrus sweetness providing flavor accent. As the last third progresses, the earth becomes the primary flavor driver. There are some baking spices through the retrohale after the re-light.
Jiunn: The final third creates more sharpness. This time, it’s minerals being attached to the dry red pepper spice. The finish is still the same grittier spice, dirt and minerals. Strength increases to medium-full, while body remains medium. 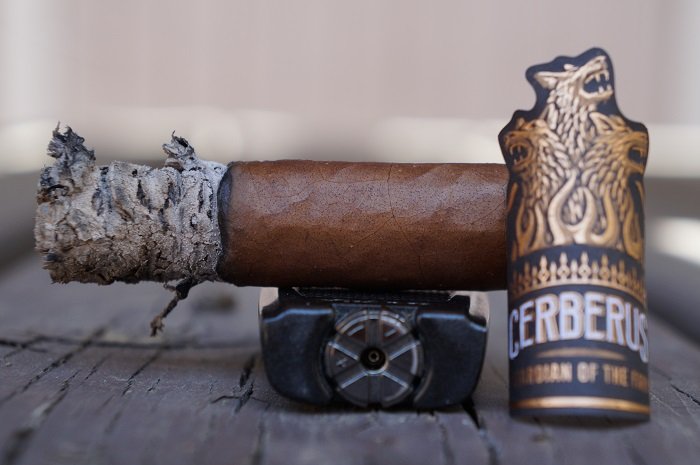 Aaron: The burn was slightly wavy at times, but never needed any intervention. The ash held on in inch and a quarter increments.
Seth: Burn was all over the place.
John: The cigar struggled to stay lit through the first third, eventually requiring a re-light half an inch into the review. By the halfway mark, the wrapper has split, and is completely split through by the last third. The cigar goes out again in the last third, requiring another re-light.
Jiunn: Burn performance was great. Even burn, solid ashes, cool burning temperature and ample smoke production. 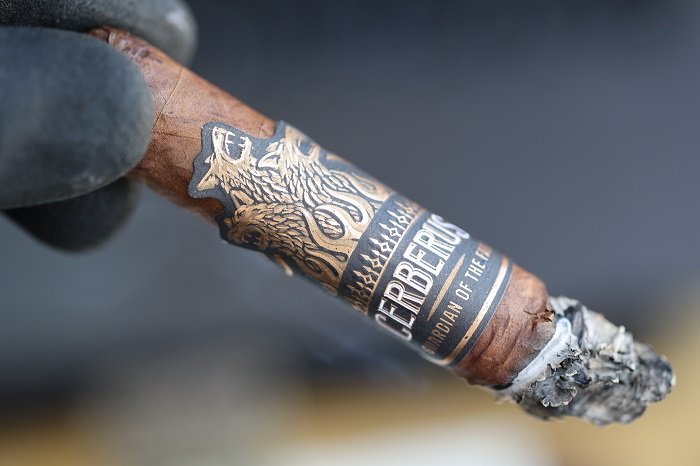 Aaron: The cigar began with toasted cedar and bold baking spice. Some dry earth joined fairly quickly. The second third saw the baking spice morph into a dull black pepper and the cedar transitioned to oak. The final third saw a vegetal note join in. The Aganorsa Leaf Guardian of the Farm Cerberus Lonsdale had an average flavor profile throughout, very focused on dry earth and toasted cedar/oak and it was a bit dry. Not exciting at all. While I’m sure there are those that like a flavor profile like this, I prefer something a bit more dynamic, maybe some added sweetness or creaminess would have helped to break things up. I know Aganorsa is pushing this 2012 leaf, but I just don’t think anyone has found the right blend to show it off yet.
Seth: The Aganorsa Leaf Guardian of the Farm Cerberus Lonsdale was an average cigar. The flavor profile was decent, but it lacked depth, complexity and transitioning. There was very little going on, the burn was continuously having to be corrected, and the cigar went out a couple times here and there. I love the Lonsdale vitola, but I don’t think it did anything for this blend. This came across as a mediocre blend that AGANORSA decided to put in a Lonsdale vitola. Then they gave it a cool name, come up with some awesome packaging for the cigar, and hope that the customer doesn’t notice it’s just an average blend.
John: The Aganorsa Leaf Guardian of the Farm Cerberus Lonsdale was pleasantly mild, but didn’t ever seem to bring engaging complexity to the table. The first third was largely bread and wood driven, the second third light wood and the last third primarily earth forward. The construction struggled unfortunately, with the wrapper splitting and two re-lights through the review. The draw was perfect. The price point on these is quite approachable and I have to imagine this was a one off experience as TABSA is well known for consistent cigars. I would try this again and hope for a better experience. Total smoking time was 1 hour and 57 minutes.
Jiunn: Not quite the Aganorsa corojo experience I was looking for. The profile starts off muted, eventually being sharp in pepper and minerals. This Aganorsa Leaf Guardian of the Farm Cerberus Lonsdale further confirms my overall feelings about recent Aganorsa offerings; i.e. they’ve deteriorated. The cigars either taste rushed and/or highly unbalanced. I’ll still hold onto hope because I know how good Aganorsa tobaccos can be.