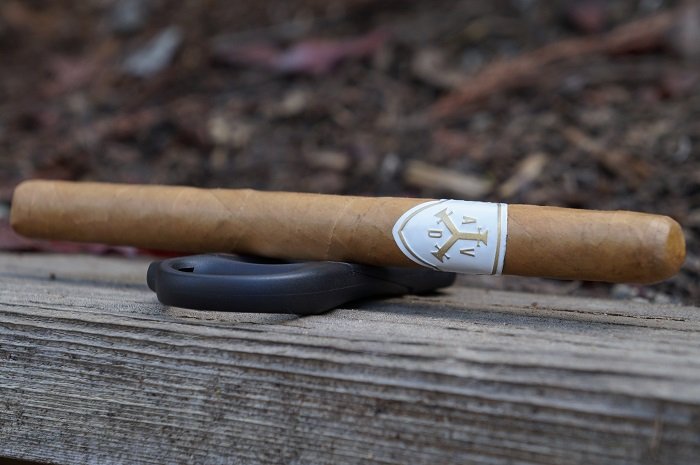 Aaron: The wrapper on the Adventura The Royal Return Queen’s Pearls Lancero is a light golden brown and has a network of lightly raised veins present. The seams are a bit raised and the caps well applied. The band is the traditional design for the brand and carries a white and gold color combination with the line name on the back. The aroma from the wrapper is musty hay while the foot brings wood, hay and cardboard. The pre-light draw brings sweet cedar and light mustiness.
Seth: I will be honest and say the presentation is lacking on the Adventura The Royal Return Queen’s Pearls Lancero. Wrapper is silky in texture, but no consistent color and it has this light Natural to light Colorado coloring throughout. The cigar is firm in hand and there are aromas of spices, cedar, leather and tobacco on the foot and wrapper.
John: The Adventura The Royal Return Queen’s Pearls Lancero is cellophaned, and in addition to a UPC sticker has a QR code. The UPC sticker has a tear tab so it remains intact when the cellophane is opened. The cigar is single banded and has a very light wrapper, with almost a candela green tinge to it. What’s interesting about the single band is that it’s made out of some sort of thin metal, like aluminium or tin, rather than paper. Aromas form the wrapper included bread, fresh barnyard, hay and mild earth. From the foot, there was dry hay and wood.
Jiunn: The Adventura The Royal Return Queen’s Pearls Lancero has a caramel Colorado Claro wrapper shade. Veins are well pressed, seams tight, bunch and roll even and head well wrapped. Aromas from the wrapper tell cedar, hay and slight green tea. Aromas from the foot give cedar, hay and white pepper. Cold draw tells of cedar and hay. 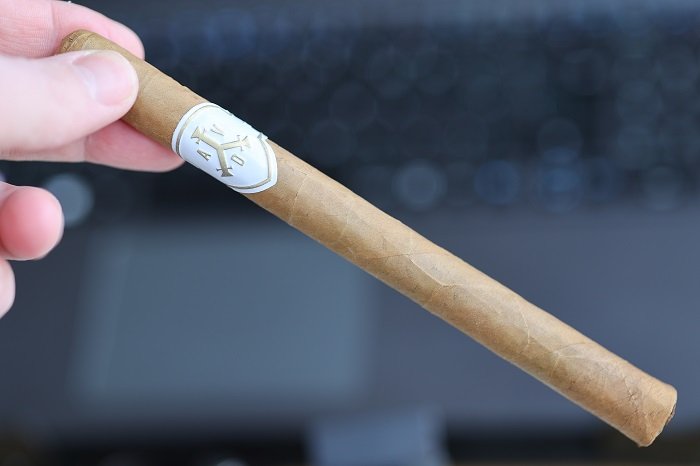 Aaron: The cigar begins with toasted cedar, black pepper and mustiness. The retrohale is toasted cedar with light amounts of mustiness and black pepper. At an inch in, subtle coffee and carboard notes join in. At an inch and a half in, the mustiness is right behind the toasted cedar while the black pepper, coffee and carboard are in the background. At two inches in, the carboard note has increased and is slightly behind the mustiness. The strength in this third was slightly below medium.
Seth: The first third starts out with lovely cream and sweet spice notes. I am picking up some earth qualities, and it is paired with some coffee and vanilla as well. Bits of nuts and leather on the finish. Medium in strength and body.
John: The first few puffs are sweet wood to open. A mild bread combines with wood on the retrohale. My initial impressions are that the profile is pleasant but the profile isn’t particularly complex. By the halfway mark, a light baking spice has joined in.
Jiunn: The first third gives a pretty traditional set of Connecticut shade flavors. It’s all about hay, cedar and nuts. Through retrohaling, greater depth is reached, with added white pepper and more nuttiness. The finish presents a long and lingering dry leather. Strength and body is medium. 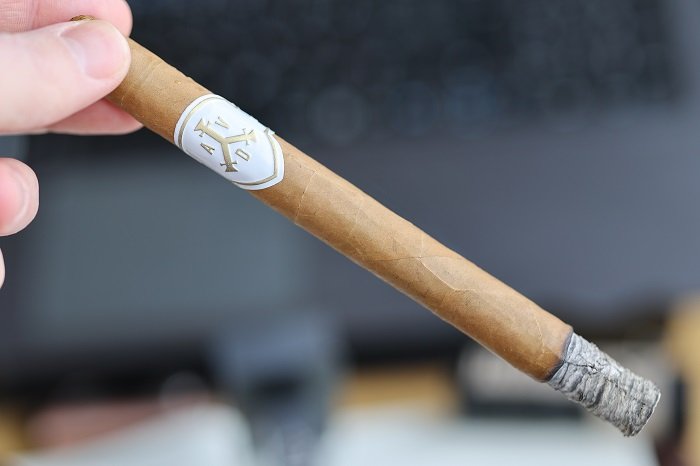 Aaron: As the second third begins, the cardboard note is now even with the toasted cedar up front. At a half inch in, the coffee and black pepper have dropped out. The retrohale is a slightly fuller version of the mouth draws with toasted cedar, cardboard and mustiness. At an inch and a quarter, the toasted cedar, mustiness and carboard are all even. At an inch and three quarters, the toast level picks up, and a slight bitterness joins the profile. As the third wraps up, the heavily toasted cedar and mustiness are even up front, with the carboard a bit behind and light bitterness in the background. The strength in this third bumped up to medium.
Seth: The second third delivers a flavor profile that has vanilla cream notes paired with coffee and a touch of lemon peel. There is this lemon curd quality present as well, and the finish is that of tobacco, sweet spice and leather. Very enjoyable. Medium in strength and body.
John: Starts out here with a similar profile to the first third, with light bread, wood and sweetness. As it progressed, light-plus strength baking spices moved into the center of the profile, and lingered into the post draw. The second third seemed to be just on the cusp of breaking into the good rating.
Jiunn: The second third gives much greater dry red pepper spice details. Aside from that, the profile does not change. It’s still full of hay, cedar and nuts with a dry leathery finish. Strength and body remains medium. 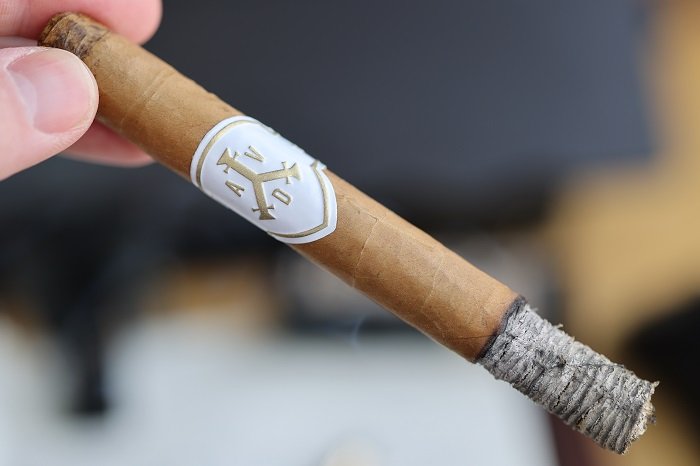 Aaron: The final third begins with the carboard dropping out and the profile being heavily toasted cedar just ahead of the mustiness with light bitterness in the background. The retrohale is toasted cedar and mustiness. At an inch and a quarter, a light floral note joins in. As the cigar wraps up, the toast level drops back a bit on the cedar while the mustiness remains right behind and the floral note is in the background with no bitterness present. The strength remained at medium.
Seth: The final third delivers a flavor profile of cream, coffee beans, cinnamon spices and leather. Touches of earth and dark chocolate are also present on the finish. Very lovely cigar at the end. Medium in strength and body.
John: Bread, wood and baking spices at a mild level take the cigar into the last third. The post draw was defined by mild, dry wood. No other evolution through the last third.
Jiunn: The final thirds add a cedar bitterness to the overall profile. In totality, the flavors consist of dry red pepper spice, hay, bitter cedar, nuts and a dry leather finish. Strength and body finishes the same medium. 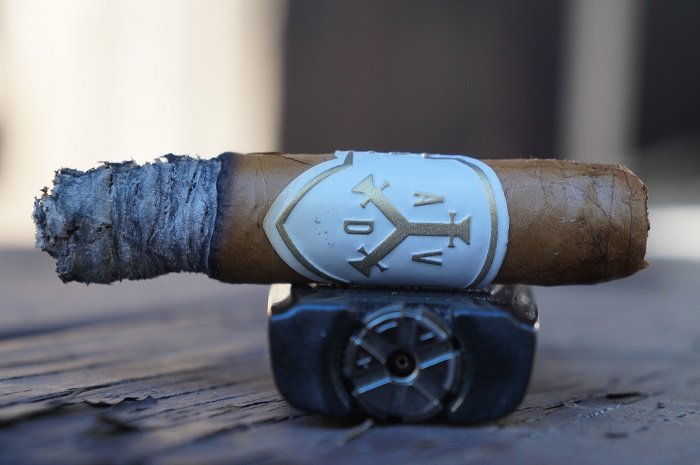 Aaron: The burn was straight the entire way with the ash holding on in about one inch increments.
Seth: Nice burn throughout.
John: The burn was straight through the entire review, with the ash holding on quite well, up to 2-1/2 inches at the longest point.
Jiunn: Perfect burn performance. Even burn, great smoke production, solid ashes and cool burning temperature. 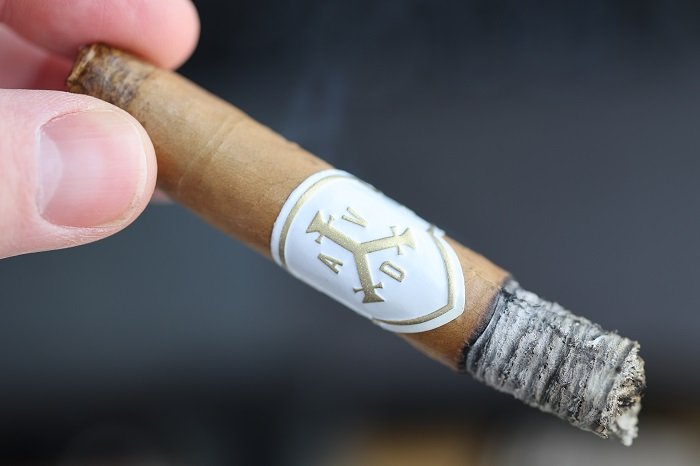 Aaron: The cigar started with toasted cedar, black pepper and mustiness. A carboard note joined in a bit later. The second third saw the toast level pick up a fair amount, The final third saw the carboard note depart and a light floral note join in. Construction was absolutely perfect. The Adventura The Royal Return Queen’s Pearls Lancero had a nice start, but the cardboard and heavy toast took things down in the second third and maintained that level the rest of the way. I’m a bit on the fence about this cigar. It straddles the line between good and average, but the high price point might make me lean towards not having a high probability of coming back to it.
Seth: I went into my first Adventura The Royal Return Queen’s Pearls Lancero with high expectations. This was the corona when there was talk on the cigar line. I kept hearing great things. Unfortunately, I did not have that experience when I lit up the corona offering in the line. However, this Lancero hit the spot. This is a very good cigar and a great lancero. I think Connecticut Lanceros can be fantastic when done correctly, and this cigar was done well. Each third was great and there was transitioning from first to final third. The cigar started strong and finished strong. With a nice body and strength level, I could smoke this lancero all the time. Of course, it is limited.
John: The Adventura The Royal Return Queen’s Pearls Lancero was pleasant and consistent through all three thirds. I didn’t find the flavor combinations came together in a way that was noteworthy or surprising. The curious thing is that I had the opportunity to smoke an aged one at the most recent TPE in Vegas, and it was considerably more complex and nuanced than the one I reviewed. Based on that experience, this is a cigar I feel I need to return to and reassess. Both the draw and construction were flawless. Total smoking time was a rapid 1 hour and 39 minutes.
Jiunn: Off balance, harsh and bitter are the three main words to wrap up my experience with the Adventura The Royal Return Queen’s Pearls Lancero. While the profile does give traditional Connecticut Shade notes, it’s plagued by unneeded earthy bitterness and harshness. I think this blend may be better suited in a larger ring gauge. That way, the bitterness and harshness can be hopefully blended out. Will have to pass on this one.