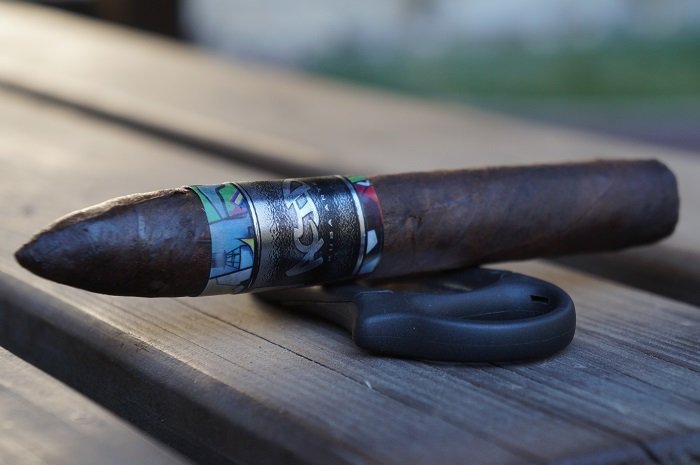 The wrapper on the ACID Kuba Arte is pretty dark but has some even darker marbling to it. There are a few veins visible and they are slightly raised. The seams are easily visible as they are slightly raised as well. The torpedo style head is well finished. The length of the cigar is 6 inches rather than the odd designation that is being advertised. The band is actually two bands on top of each other. The brand and line are denoted on the front while Limited Edition is denoted on the back. The outer band is primarily black and silver while the underband carries excerpts of the artwork that was put together for this release. The aroma from the wrapper is a synthetic cherry sweetness mixed with a light amount of menthol. The foot brings a mix of wood and gingerbread, The pre-light draw brings a light cedar, but there is an immense amount of sweetness on my lips and tongue from the wrapper. 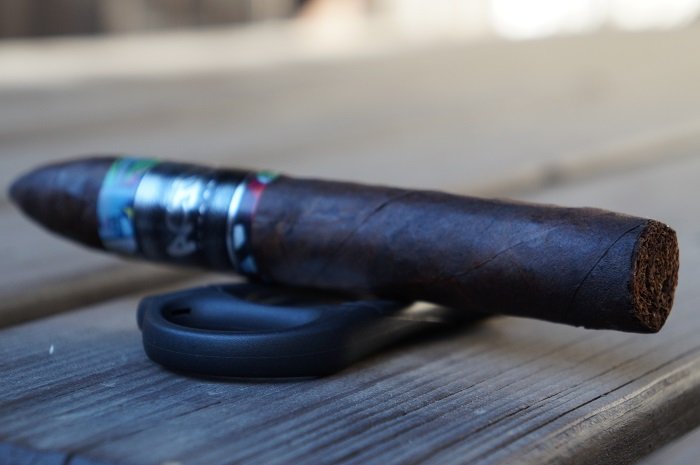 The ACID Kuba Arte is a well constructed Belicoso and has a lovely tapered finish. Solid maduro, it has a slightly gritty wrapper with some bumps here and there. There are few veins present and those that are, are small to large in size. The aroma is of sweet flowers, rich earth, spices and cocoa, and I am getting some patchouli like qualities as well. 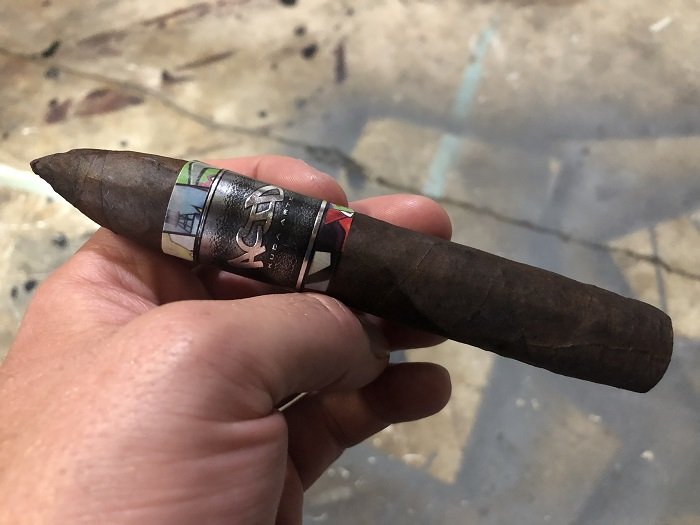 The ACID Kuba Arte has a dark maduro color wrapper and is available in a unique torpedo at 5-13/16 inches by 54 ring gauge. The vitola gets a JMSG pass, even though torpedo can describe a wide range of lengths and ring gauges as long as it has a pointed cap. The band is quite modern with metallic silver lettering and water tower outline, on a black matte background. It also has an artistic second band underneath with a variety of colors. Nosing the wrapper, I’m picking up vanilla, mint, chai, rosemary and other botanicals I can’t define. In the foot, I picked up sweet vanilla and a raisin tobacco. 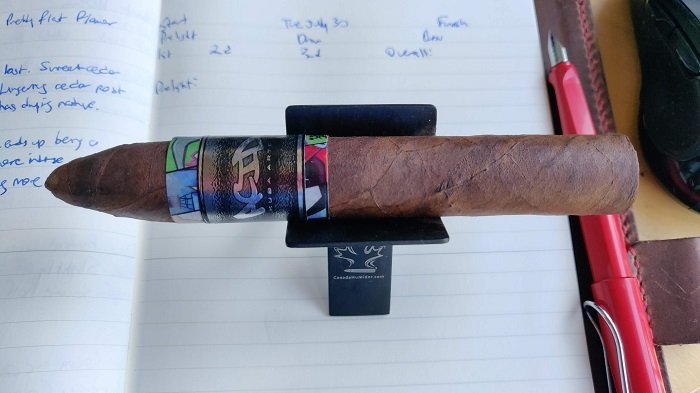 The cigar begins with a light musty wood which is joined by a slightly delayed sweetness that comes from the wrapper on my lips and tongue. At a half inch in, a faint pepper joins the profile. At an inch in, the profile is still wood and light mustiness, but the pepper has become a bit fuller. The added sweetness from the wrapper is fading. The retrohale just consists of the wood note. At an inch and a half, the wood and black pepper are at equal levels while the mustiness is right behind. The added sweetness from the wrapper is still hanging on but not overwhelming. As the third comes to a close, a slight menthol note joins the profile. The strength in this third was mild-medium. 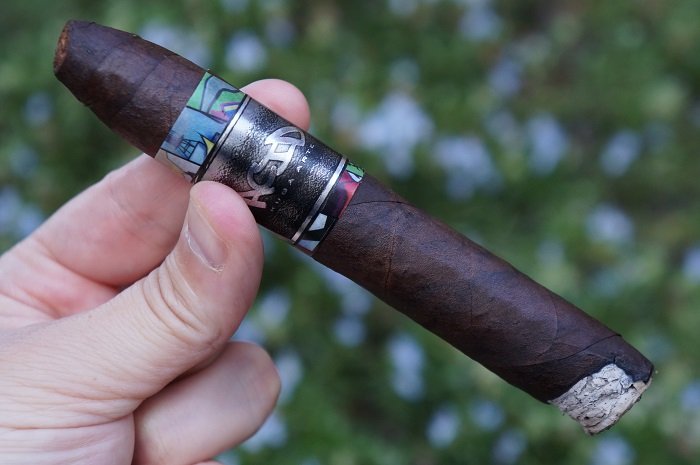 The first third opens up by delivering some rich earth and chocolate notes. I am getting this cafe mocha quality as well and it has a soft creaminess as well. There are some leather and peppery notes present as well, and it has a slightly citrus finish. I would classify the body as being medium-full, flavors as well, and the strength is around a medium level. 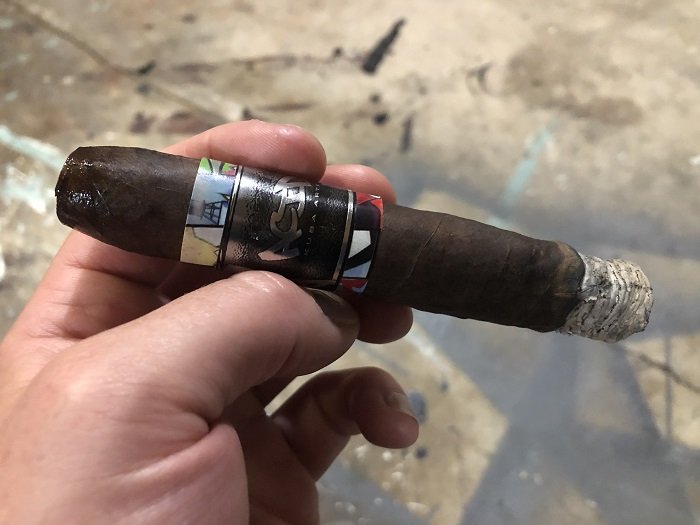 My first few puffs and I immediately taste the sweetened cap, followed by dry cedar and dry cedar on the post draw. On the retrohale, there’s some creamy cedar. Overall, as the cigar starts, the sweet cap is driving almost all the flavor. I would describe the cedar as having a clean finish, with some of the botanicals coming through at the end of the draw as it settles in. Some mild cinnamon comes through on the retrohale, along with light plus earth on the post draw by the 35 minute mark. 5 minutes later, some post draw bitterness begins to compete with the sweet cap. At the halfway mark, vanilla sweetness joins the retrohale, along with light plus cocoa as the post draw bitterness falls. I found the first third to be fairly average with none of the flavors standing out or having any particular complexity. 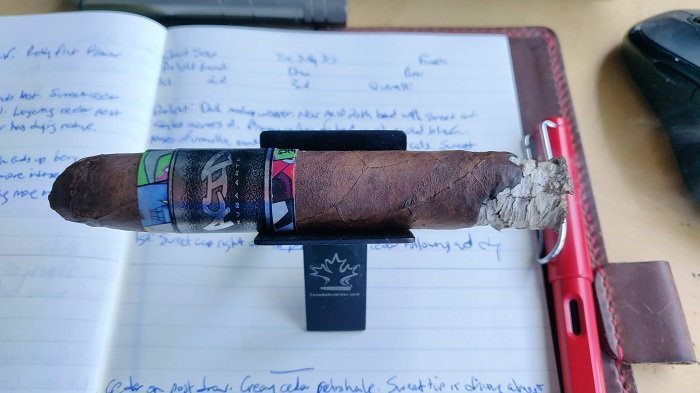 As the second third begins, the black pepper has dropped out of the profile as the wood and mustiness are at equal levels and the menthol note is in the background. The sweetness from the wrapper is now fairly faint. At a half inch in, a slight baking spice joins the profile. The retrohale now carries a toasted wood note along with a faint mustiness. At an inch and a half, the baking spice is gone and the musty wood is still up front along with some light menthol and now some cherry sweetness. There is just a faint sweetness still present from the wrapper. As the third comes to a close, the wood becomes a bit fuller and has a lead over the mustiness while the cherry/menthol combination maintains itself in the background. The strength remains at mild-medium. 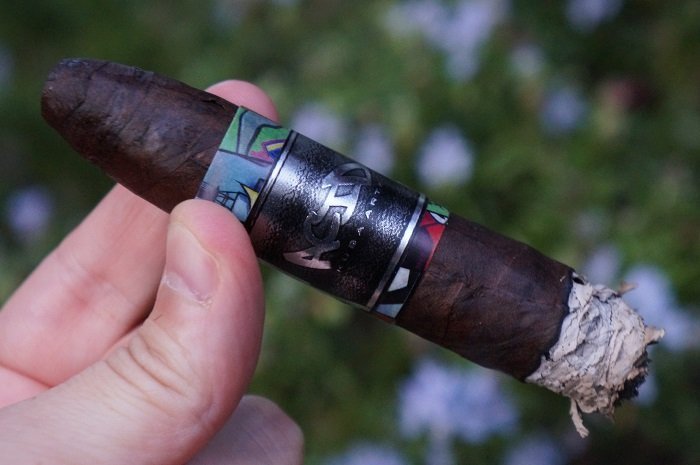 When I get into the second third of the cigar, I find the flavor profile is fairly similar, but there is a rise in the pepper and lemon peel flavor profile, and I am getting some herbal qualities with that. It still has that earth and chocolate like core with that cafe mocha profile as well. I found the cigar to be medium-full in all categories in this third. 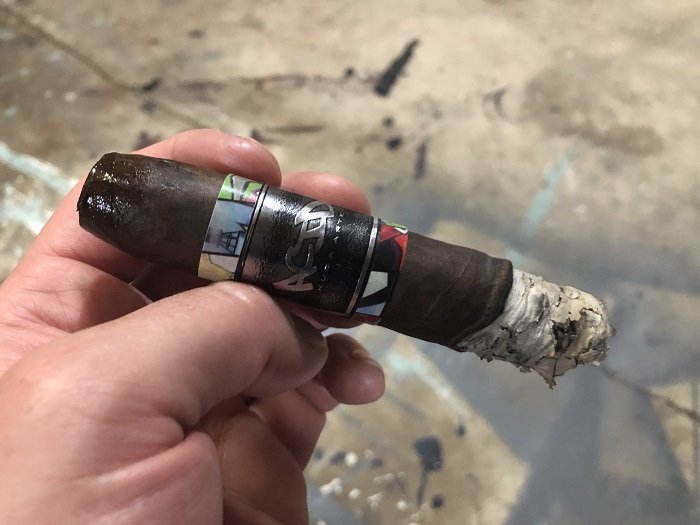 The bitterness returns moving into the second third, with the post draw still consisting of dry cedar. Mild vanilla is still present on the retrohale. I’m getting a significant amount of botanicals on the smoke aroma, but not through either the retrohale or main draw. By the bottom half, bitter earth has taken over the profile. I rated the second third as subpar. The profile started out fairly average but the bitterness just overwhelmed the cigar by the halfway point and was not enjoyable. 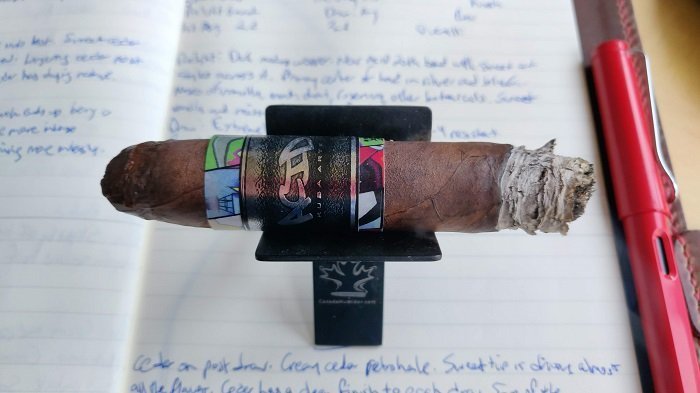 As the final third begins, the wood is up front with the mustiness right behind. The cherry/menthol note is no longer present. At a half inch in, a slight cherry sweetness returns and some more sweetness from the wrapper is present. The retrohale consists of musty wood. As the cigar wraps up, some menthol returns to the cherry sweetness while the musty wood is up front. The strength in this third bumped up to slightly below medium. 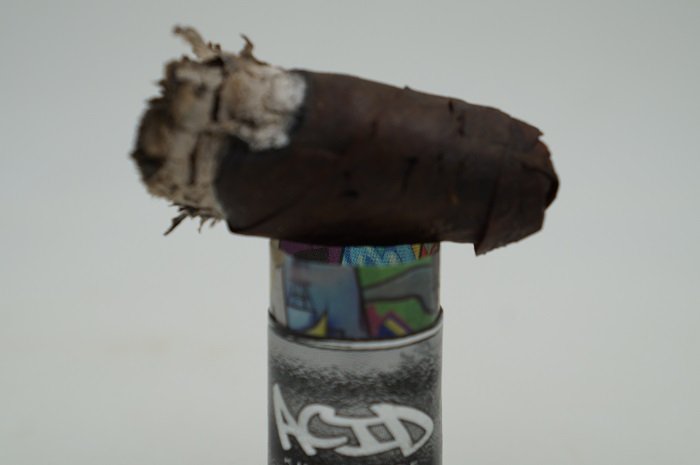 I am in the final third of the cigar now and finding the flavor profile to be slightly on the decline from the first and second third. It has a more natural flavor profile in the finish and is showing more earth, cafe mocha and pepper qualities. There is a faint bit of lemon peel to the cigar, but it is much more subtle. Like the second third, I find it to be medium-full in all categories. 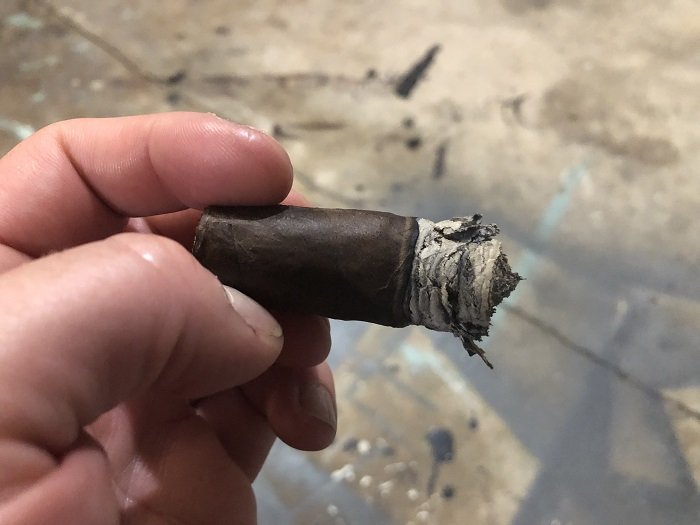 Bitter earth is still present going into the final third. The sweet cap is still detectable but is fading quickly. The retrohale is largely cedar. Once the cigar has settled in, the bitter acrid earth takes over again for the remainder of the smoking experience. The final third was more of the same from the second third, with the bitter earth being an unpleasant smoking experience. 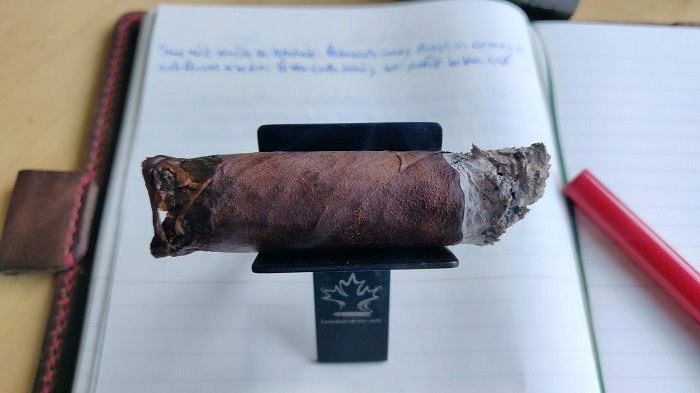 The burn was wavy from the start and continued that way throughout. The cigar went out twice, requiring re-lights and the final third seemed to struggle to stay lit. The cigar burned quite slow, giving a long smoking time and even though the cigar smoked slow, it put on a smoke show. 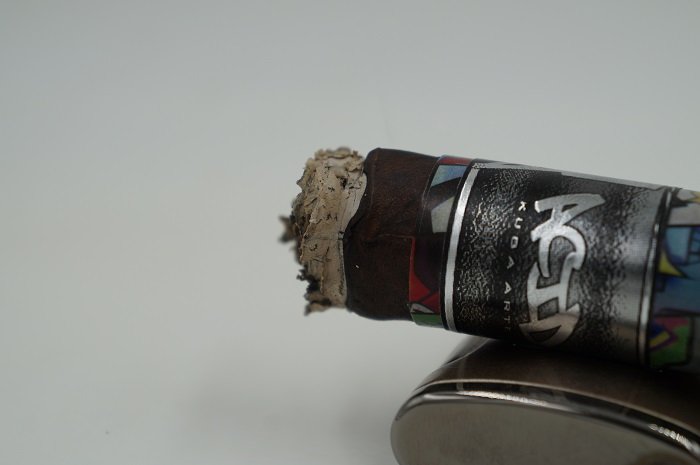 The construction and burn on the cigar was solid from start to finish. It was not perfect, but it did not present any problems either. Produced a nice light gray ash that held on firmly and a plethora of smoke. 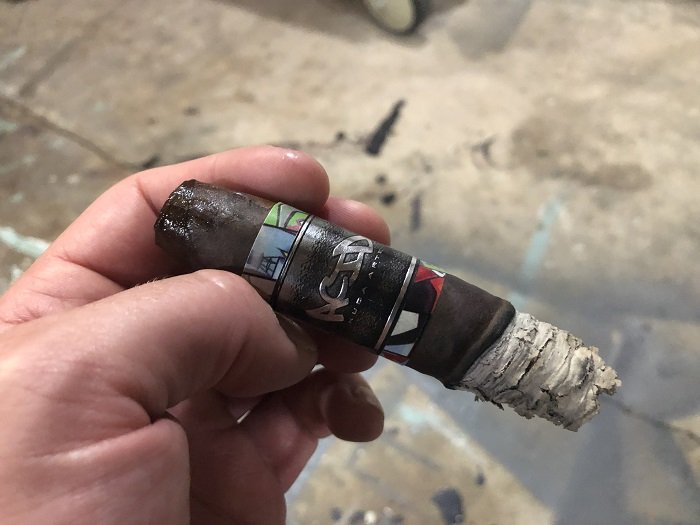 The burn was straight throughout the entire smoking experience. No issues to report. 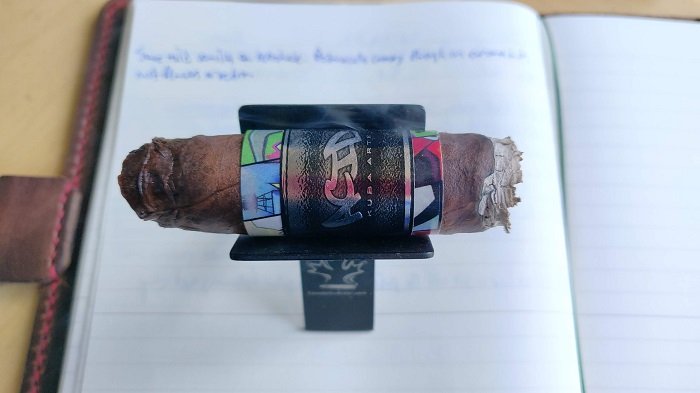 The draw was fairly tight. I made a second cut on the Torpedo head which brought short relief, but it tightened back up.

Once getting past the immense sweetness from the wrapper, the cigar provided a mostly normal flavor profile. The cherry/menthol component definitely came from the infusion, but the wood, mustiness, pepper and baking spices were all non-infused components. Construction was a bit of a struggle with the tight draw and burn issues. I could definitely see the ACID Kuba Arte appealing to a lot of smokers as infused fans will find a mellow flavor profile that isn’t too full to put them off and even non-infused smokers could enjoy this as the infusion and sweetness aren’t all that prominent. I would smoke this again when in the mood for something a bit sweeter, but it isn’t going to be at the top of my list of cigars to return to.

The draw was solid on the cigar, though a little loose for my liking. I think a tighter draw would have improved the smoking experience, but that is personal opinion.

The ACID Kuba Arte is a solid offering and a nicely infused cigar from ACID. It is probably my favorite offering ever from ACID, and it is a blend that is good, but taken to a higher level with the infusion. The infusion is not over the top, but shows some natural qualities in the smoking experience. The Broadleaf wrapper on the cigar really helps with that, and it provides a nice richness and earthiness which helps the overall blend. You get the infusion, but those Broadleaf flavors as well. With a nice body and strength level, this is a cigar I would highly recommend to those who smoke ACID and would also recommend to those who “don’t smoke ACID.” I think its an infused offering that the latter could get behind.

I found the draw to be extremely resistant, between 3 and 4 notches. Strangely, I’m still able to draw and get a significant amount of smoke each puff.

The ACID Kuba Arte overall was a sub par smoking experience. The first third was quite average, with none of the flavors capturing my attention. Unfortunately, the middle and last thirds were bitter and unpleasant, with no interesting flavors or complexity present. I had no issues with the burn, but the draw was extremely tight. Total smoking time was 1 hour and 47 minutes.