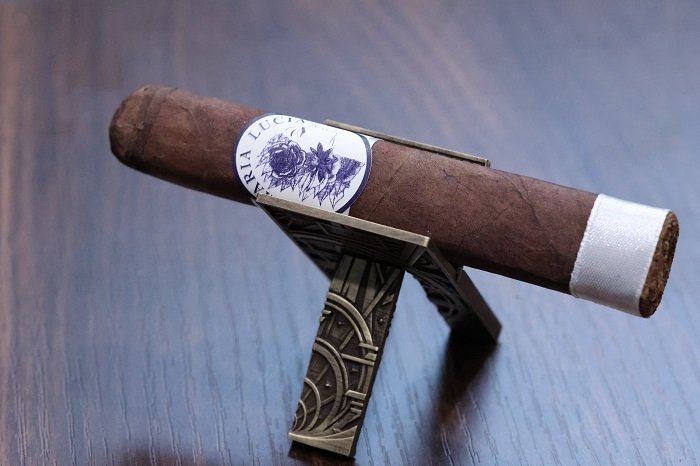 Aaron: The rectangle pressed ACE Prime Maria Lucia has a wrapper that is medium brown with some darker marbling and very lightly raised veins. The seams are smooth and the caps well applied. There are two bands, with the primary being white, dark blue and silver with the line name and a drawing of a woman’s face. The foot has a white ribbon. The aroma from the wrapper is a mix of dark earth and cocoa while the foot brings a spice cake aroma, heavy on the spice. The pre-light draw brings aged, musty cedar and floral notes along with a mild spiciness on my lips.
Seth: The band really is beautiful on the pressed ACE Prime Maria Lucia. Nice Colorado Maduro to Maduro coloring cigar. You can see the Maduro coloring, but there is some reddish tobacco color in there. Medium sized veins throughout. Cigar has a fine, gritty texture, almost silky. Aromas on the foot of damp earth, wood, chocolate and sweet spices.
John: The ACE Prime Maria Lucia comes in cellophane, and has a UPC sticker that tears in half when opened. It was a Maria Lucia primary band, along with a silver ribbon foot band. The cigar has an additional artisanal complication of being box pressed. Aromas from the wrapper included sweet barnyard, old wood and sweet earth. From the foot, I was able to pick up on sweet tobacco and fig.
Jiunn: The ACE Prime Maria Lucia has a hearty maduro wrapper shade. Veins are well pressed, seams tight, bunch and roll even, and head is well wrapped and capped. Aromas from the wrapper tell Virginia pipe tobacco, cedar and hay. Aromas from the foot give assertive white pepper spice and sharp cedar. Cold draw tell nuts and hay. 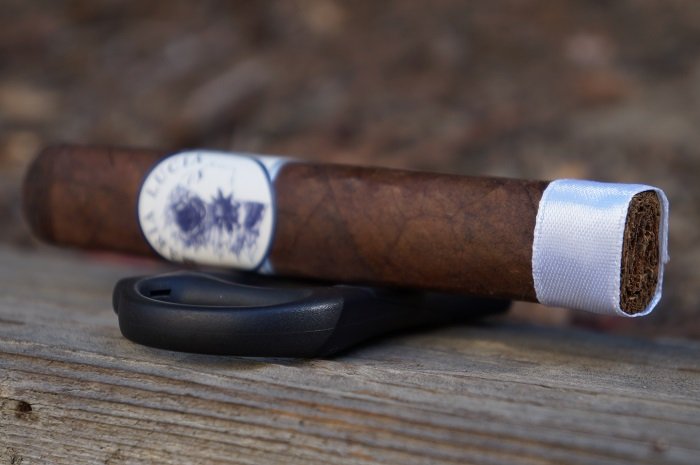 Aaron: The cigar begins with a heavy, dark oak, black pepper and some earth. At a half inch in, the oak gains a light toast. The retrohale is toasted oak with light amounts of black pepper and earth. At an inch in, the black pepper has mellowed a bit. As the third comes to a close, the dark, lightly toasted oak is up front with black pepper a bit behind and earth a little further behind. The strength was slightly above medium.
Seth: The first third has a nice start and it is showing some mocha and Mexican hot chocolate qualities that are creamy and spicy with tobacco notes. Medium to medium-full in strength and body.
John: The first few puffs bring flavors of molasses, spices and wood. Some chocolate and wood come through on the retrohale. Trailing spices develop on the post draw, and sweet earth moves into the center. As the first third settles in, chewy leather adds to the end of the draw, and is accented by the spices already present. Sweet tobacco combines well with wood through the bottom half.
Jiunn: The first third hits all the right vibes. Viscous medium-full body (medium-full strength as well). Dark chocolate, chewy meatiness, cedar and earthy grittiness. Retrohaling gives more dark chocolate, introduces dried red pepper spice and a hint of dark cherries. The finish shows earth grittiness that lathers the entire palate. 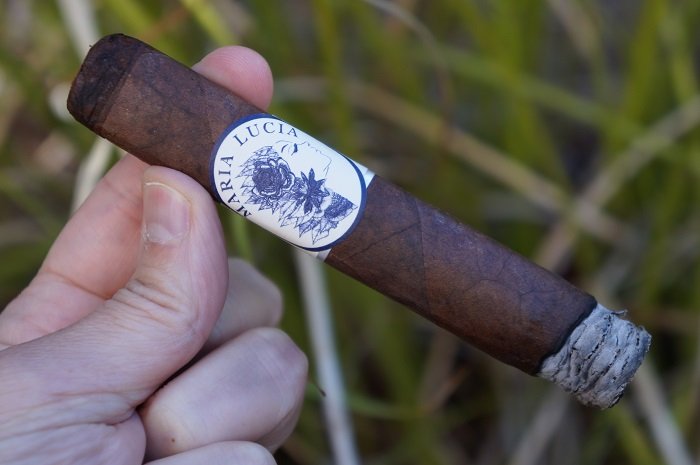 Aaron: As the second third begins, a light creaminess joins the profile and the earth picks up to become even with the black pepper. The retrohale is now toasted oak, earth and mild black pepper. At an inch in, the black pepper is now pretty mellow. At an inch and a quarter, a light chocolate syrup note joins the profile. As the third comes to a close, the toasted, dark oak is up front with earth right behind and black pepper, creaminess and chocolate syrup in the background. The strength dropped down to medium.
Seth: The second third is fairly in line with the first. A little bit more tobacco and earth, but it has that mocha and Mexican hot chocolate quality with a nice creamy and sweet spice balance. Again, medium-full in strength and body.
John: The second third gets going with baking spices, wood and tobacco as leather and wood finishes the draw. Tobacco and earth are the primary flavor drivers through the retrohale. Wood begins to define the post draw as the second third progresses. That wood component leads off the draw by the halfway point.
Jiunn: The second third is a continuation of the first third. Still medium-full body and strength with a robust full flavor profile consisting of dark chocolate, chewy meatiness, cedar and earthy grittiness. 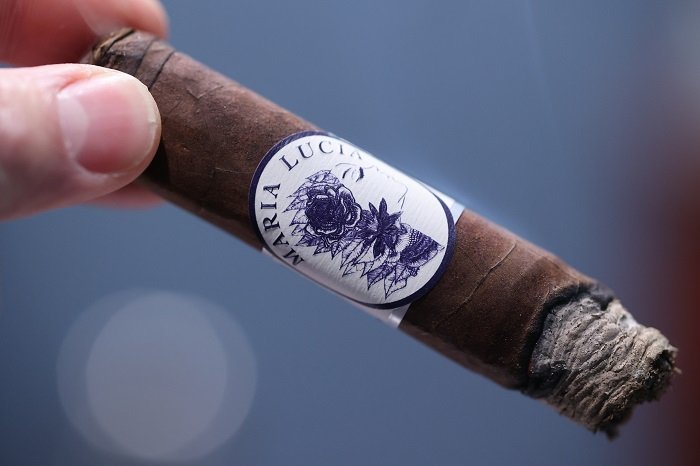 Aaron: As the final third begins, the chocolate syrup note departs and a cotton candy granular sweetness appears. At a quarter inch in, the cotton candy sweetness is now very faint while the toast level of the oak increases. The retrohale is now just toasted oak and earth. At an inch in, the black pepper picks back up a bit and the cotton candy sweetness is gone. As the cigar wraps up, the toasted dark oak is up front with earth right behind, black pepper a bit further behind and light creaminess in the background. The strength bumped back up to slightly above medium.
Seth: The cigar became a little muddled in the end, but not unpleasant. Mocha and hot chocolate blend. Lost some of the depth. Some mineral and strong tobacco notes too. Medium-full in strength and body.
John: The last third brings a combination of earth, wood and leather which all lingers into the post draw. Earth and tobacco settle into the center of the profile after a few puffs. Some time later, chocolate is detectable through the retrohale. Tobacco and aged wood are driving the retrohale by the halfway point.
Jiunn: The final third has a minor change, such that the dried red pepper spice shows up on the mouth draws a bit more. Other than that, it’s still the goodness of the chewy and dank flavor profile. Strength and body is unchanged at medium-full. 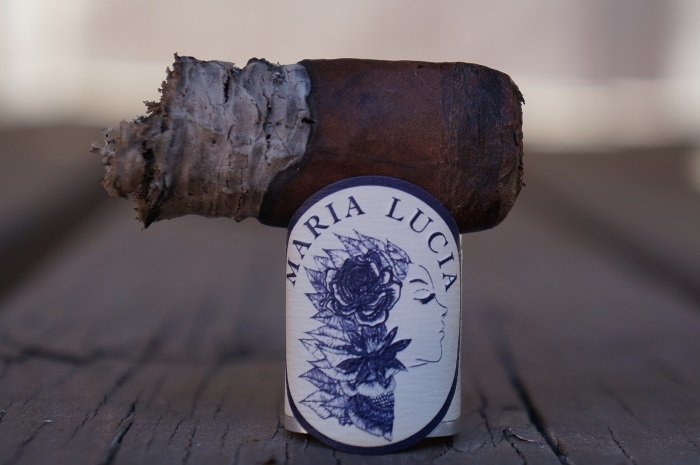 Aaron: The burn was a bit wavy at times, but never needed any attention and the ash held on in one inch increments.
Seth: Nice burn throughout.
John: The burn is slightly uneven through the first third, with a one inch ash. It continues to burn unevenly in the second third, eventually requiring a touch-up by the halfway point. No issues through the last third.
Jiunn: The burn performance was great. Overall even burn, cool burning temperature and good smoke production. 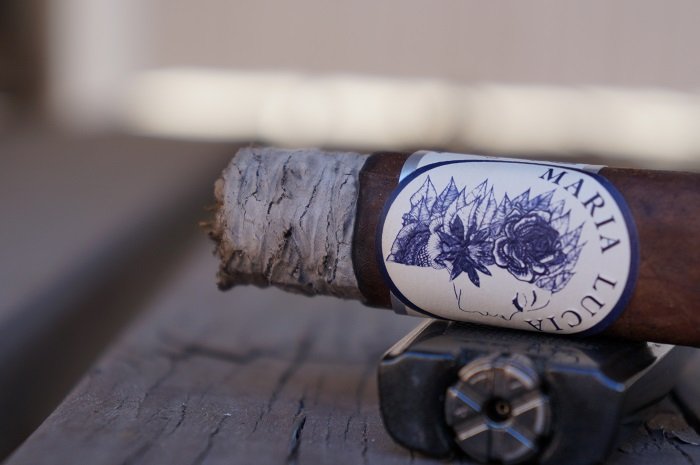 Aaron: The cigar began with a heavy, dark oak, black pepper and some earth. The oak gained a light toast note fairly quickly. The second third saw a light creaminess join and then later a chocolate syrup note. The final third saw the chocolate depart and a granular cotton candy sweetness joined for a short time. The ACE Prime Maria Lucia started well, with a good amount of body. This continued through the second third when a chocolate syrup sweetness joined that I don’t get very often. The final third dropped a level as the sweetness departed. This is a fairly impressive cigar as it had a nice balance of body and strength with some strong flavors. I’d be up for coming back to this and look forward to other vitolas in the future, which I think has been reported as a possibility.
Seth: I liked the size of the ACE Prime Maria Lucia, the packaging and the price. The blend was enjoyable for the first two thirds. Would have loved to see it finish better. This might be the best PCA exclusive cigar I have smoked. Aaron will have to confirm. I would definitely buy it again, and it’s a cigar I could smoke back to back and enjoy.
John: I had the good fortune to smoke several ACE Prime Maria Lucia cigars at the PCA in Las Vegas in the summer. Although I thought at the time those were better than the cigar I reviewed, it’s always difficult to get a proper read on the profile in the hot and dry climate of Las Vegas. Overall, the ACE Prime Maria Lucia delivered engaging and complex flavors for most of the cigar and I would be happy to smoke it again. Both the burn and draw were nearly perfect, with some minor snugness on the draw, and a single touch-up required on the burn. Total smoking time was 1 hour and 44 minutes.
Jiunn: This ACE Prime Maria Lucia is Connecticut Broadleaf done right. Chewy, dank earthiness and deep flavored. All this goodness held on for the entirety of the cigar. In a world where a quality Connecticut Broadleaf blend is rare and monopolized by only a few brands, for the sake of all lovers of broadleaf, this cigar need to still be in production. Will buy a box with no hesitation.