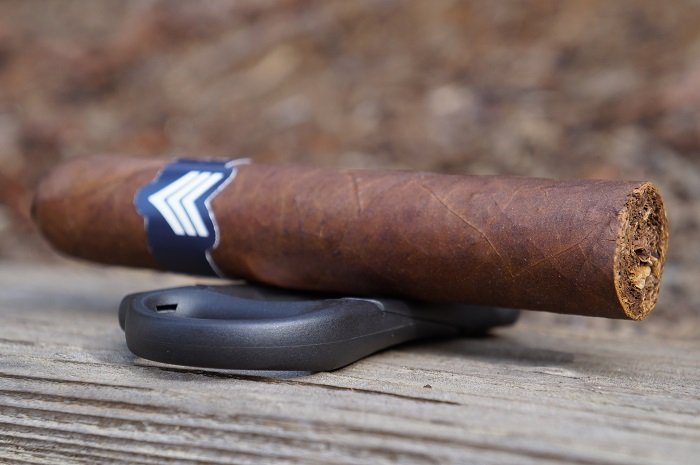 Aaron: The wrapper on the A.C.E. Prime The Sergeant is medium brown with a few lightly raised veins and a network of fine veins. The seams are smooth and the caps mostly well applied aside from a sharp edge at one part of the top cap. The band is blue and white, showing 3 up and 3 down along with the line name. The edges of the band are showing the white paper as though the cuts weren’t very clean. The aroma from the wrapper is a mix of damp wood and damp earth while the foot brings stewed fruit, wood and mild spice. The pre-light draw brings a slightly musty cedar along with some grapefruit sweetness.
Seth: Firm throughout, the A.C.E. Prime The Sergeant sports an oily wrapper that has a fine coarse texture. There are small veins located throughout, and the coloring is that of a Colorado Maduro. It has a nice chocolate brown coloring, and it has aromas of wood, spices and tobacco.
John: The A.C.E. Prime The Sergeant is cellophaned with a UPC sticker that tears when opened. I don’t normally comment much on the bands, but the band appears to have frayed edges to it, as if it was cut poorly. I’m not sure if this is an intentional design or an issue with the band supplier. Aromas from the cigar included tobacco, chocolate and faint barn wood. Sweet tobacco is present from the foot.
Jiunn: The A.C.E. Prime The Sergeant has a shiny and oily Colorado wrapper shade. Veins are well pressed, seams tight, bunch and roll even and head well wrapped. Aromas from the wrapper tell cedar, barnyard and almost a stinky cheese type quality. Aromas from the foot tell rich nuttiness and beef jerky. Cold draw gives cedar and sweet and creamy toasted nuts. 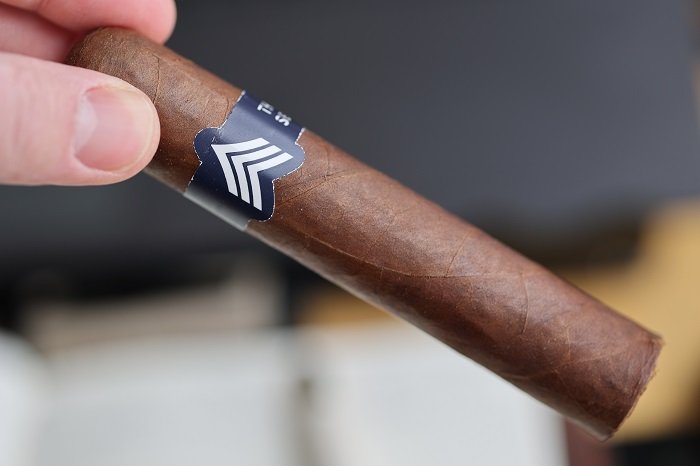 Aaron: The cigar begins with toasted wood, light mustiness and a light spray paint note. At a quarter inch in, a light chalkiness joins in. At a half inch in, the paint note is gone. The retrohale is a mirror of the mouth draws bringing lightly musty, toasted wood and light chalkiness. At three quarters of an inch in, the wood becomes more defined as cedar. As the third comes to a close, some dry earth joins the profile. The strength is slightly below medium.
Seth: The first third has a nice beginning, and I am getting some coffee notes that are paired with this caramel and floral quality. I am also picking up some graham cracker, earth and sweet spice notes. Medium in strength and body.
John: The first third opens with nuts and wood, as the post draw is defined by sweet wood and delayed nuts. A mild coffee develops through the retrohale. The profile becomes wood forward by the halfway mark. Pleasant, but not dynamic.
Jiunn: The first third shows good balance of most spectrums of flavors. There’s sweetness and creaminess off toasted mixed nuts, wood earthiness off cedar and soft bread. Retrohaling is surprisingly soft, not giving the typical increase in spices. Rather, it elevates the mouth draw notes. The finish gives some nice medium tannins with cedar and nuts. Strength and body is medium. 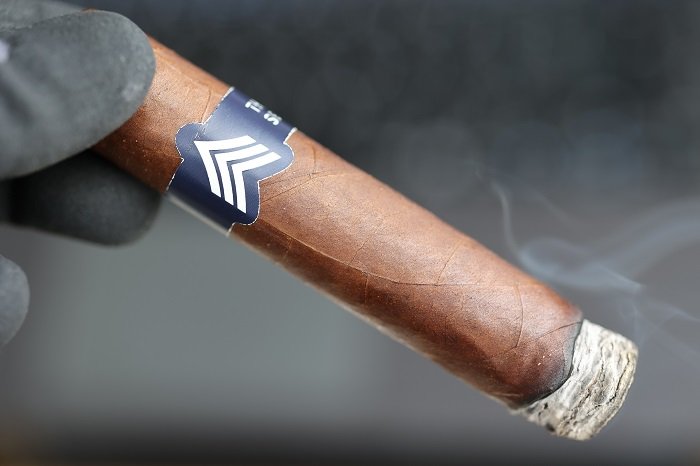 Aaron: As the second third begins, the chalkiness picks up a bit as a faint floral note appears. At a half inch in, the chalkiness is now right behind the musty, toasted cedar and the floral note has departed. At three quarters of an inch in, the dry earth increases in fullness. The retrohale is musty, toasted cedar and chalkiness. At an inch and a quarter, the chalkiness and dry earth are even, right behind the musty, toasted cedar. As the third comes to a close, the toast level has increased. The strength in this third bumped up to medium.
Seth: The second third delivers a continuation of the first third. I am picking up cocoa and coffee notes, and they are paired with that caramel and floral profile. There is a nice peppery sweet spice on the finish, and the cigar is smoking around a medium level in strength and body.
John: Mild chocolate and a slightly dry wood moves the cigar into the second third. The profile is similar to the first, becoming wood forward as it progresses. Some earth joins the finish of the draw approaching the halfway mark.
Jiunn: The second third has a similar feel to the first third. It’s still pretty balanced with the same naturally sweet and creamy toasted mixed nuts, cedar and soft bread. A bit more tannins come through, but it isn’t enough to alter the main profile. Strength and body remains medium. 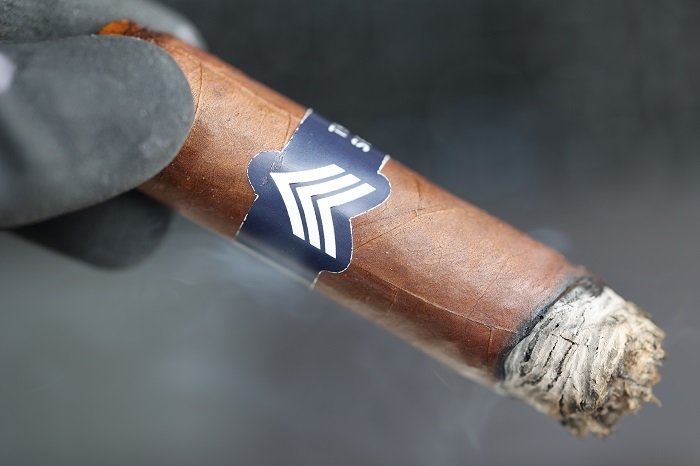 Aaron: As the final third begins, the cedar has transitioned to oak and with the heavy toast, brings a slight BBQ smokiness. At a quarter inch in, the chalkiness is now very light. At a half inch in, the musty, toasted oak and dry earth are even with light chalkiness in the background. The retrohale is musty, toasted oak and dry earth. At an inch in, the heavy toast transitions to a light char. As the cigar comes to a close, the profile is musty, lightly charred oak and dry earth up front with light chalkiness in the background. The strength bumped up to slightly above medium.
Seth: The final third is a continuation of the first third. I am picking up caramel, cocoa and coffee notes. There are some sweet spices as well, and the finish has this floral pepper quality. Like before, medium in strength and body.
John: The profile is a mild, dry wood going into the last third. Some mild earth and a muted espresso settle into the center of the profile approaching the halfway mark.
Jiunn: The final third shows some sharpness in minerals, which lessens the softness of bread and toasted mixed nuts. Strength and body finish the same medium. 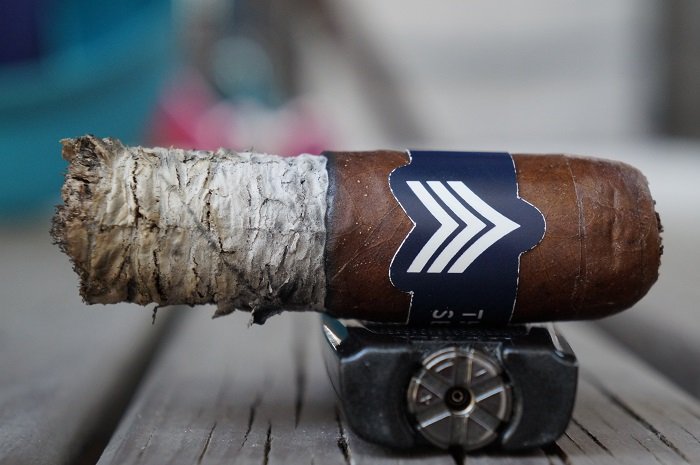 Aaron: The burn was perfect throughout and the ash held on in two inch increments.
Seth: Great burn.
John: The burn was razor straight to start, becoming offset in the second third, eventually requiring a touch-up.
Jiunn: Burn performance was almost perfect. Just a couple minor issues with an uneven wrapper burn, resulting in a couple quick touch-ups. 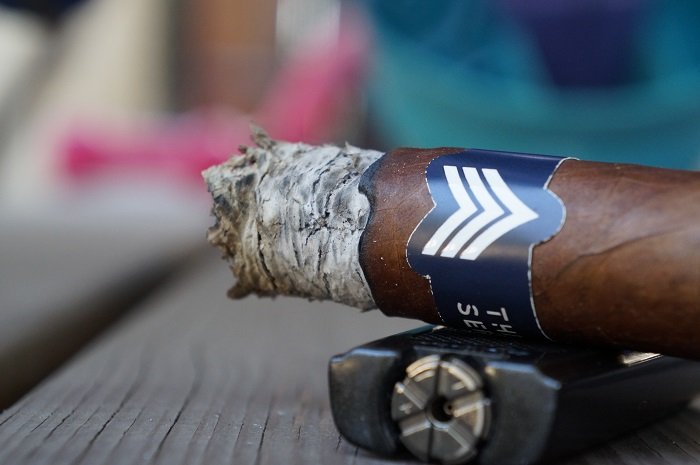 Aaron: The draw was slightly tighter than I prefer, but didn’t cause any issues with the smoking experience.
Seth: Very nice draw throughout.
John: The draw was extremely resistant, 4-1/2 to 5 notches. I was still able to draw smoke but it was distracting through the review.
Jiunn: The cigar was bunched pretty tight. This resulted in a slightly snug draw. Nothing major though.

Aaron: The cigar began with toasted wood, light mustiness and a light spray paint note. Some chalkiness joined in fairly quickly and the paint note departed. The wood became more defined as cedar as the third ended. The second third saw dry earth join in. The final third saw the cedar transition to oak and the toast build up and later changed to a light char. Construction was almost perfect aside from a slightly tight draw. Overall, the flavor profile of the A.C.E. Prime The Sergeant was average throughout. The chalkiness was a flavor component I could have done without, but even without that, the profile didn’t bring anything that was very exciting. Not something I’d really see myself returning to.
Seth: I enjoyed the A.C.E. Prime The Sergeant and I thought it was a nice blend out of Pichardo. It had that Pichardo quality that I am picking up in their blends, and it is this sweet herbal tobacco spice quality. I did think the blend became a little repetitive, as the second and final third are right in line with the first third, but it was enjoyable. It is a blend I would smoke again, but not something I would hunt down. This may seem like something I say about a lot of cigars, but this would be a great petit robusto. Reduce that ring gauge, just a touch.
John: The A.C.E. Prime The Sergeant offered some pleasant flavors in the first third but became linear and monotonous for more than two thirds of the review experience. I don’t know whether the restrictive draw on the cigar I reviewed impacted the flavor performance, but I can’t imagine it helped. The price point isn’t unreasonable, so I may give this another go in the future to see if a less resistant draw makes a significant impact for the profile. Total smoking time was 1 hour and 59 minutes.
Jiunn: We got ourselves a winner here folks. To my surprise, the A.C.E. Prime The Sergeant was a pretty well balanced cigar. After reading that it’s corojo, I expected more spice, but perhaps it got blended out from the large 58 ring gauge. Sweetness and creaminess off toasted mixed nuts, wood earthiness off cedar, and soft bread. This is the type of profile that I can sit back and smoke multiples of in a day. Happy to smoke more.