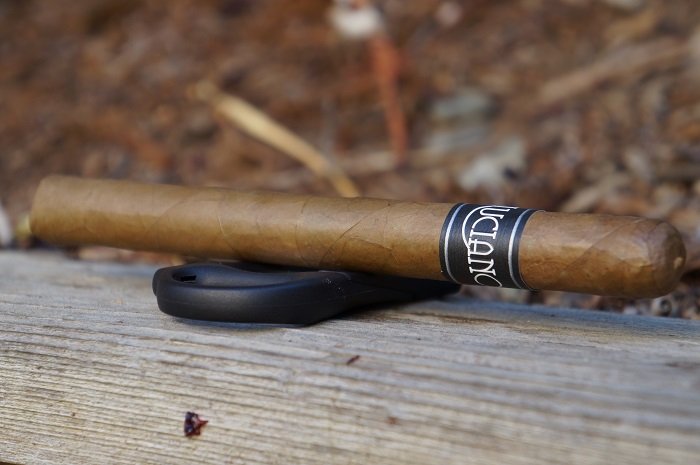 Aaron: The wrapper on the A.C.E. Prime Luciano The Traveler is a dull light brown with a greenish tinge. There are a few decently raised veins present while the seams are quite smooth and well blended. The head is finished off with a well applied double cap. The band is black with white borders and text that displays Luciano. The aroma from the wrapper is a slightly green hay while the foot brings stone fruit sweetness along with some wood. The pre-light draw brings a slightly young cedar along with a mild spiciness on my lips.
John: The A.C.E. Prime Luciano The Traveler comes cellophaned, and includes a UPC sticker with an integrated tear point. The cigar has a smooth, tan wrapper. Nosing the wrapper, I could pick out very sweet, almost like a sugar reduction, bread and yeasty undertones. From the foot, there was sweet tobacco. 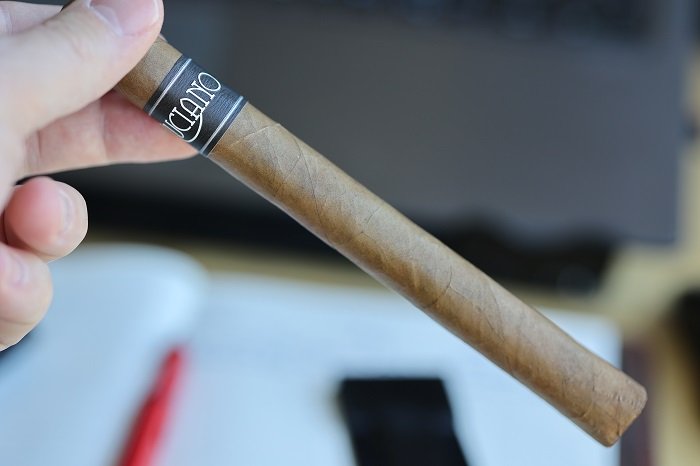 Aaron: The cigar begins with a mix of cedar, baking spice and light vegetal note. At a half inch in, the vegetal note is replaced by a light mustiness. The retrohale is an even mix of the cedar, baking spice and mustiness. At an inch in, the cedar and baking spice are even up front with the mustiness slightly behind. As the third comes to a close, the cedar, baking spice and mustiness are all even. The strength in this third was right at medium.
John: The first few puffs bring a funky bread, reminding me of a farmhouse ale, with a vegetal sweet and musty combination. Some medium strength baking spices and wood combine through the retrohale. As the first third settles in, wood finishes the draw, with a lingering dryness into the post draw. Some medium strength chocolate adds complexity to the retrohale as the cigar progresses. There’s a savoriness I can’t identify, the closest descriptor I could give is the after taste from peanuts. By the halfway point, the post draw dryness is significant and unbalances the profile. 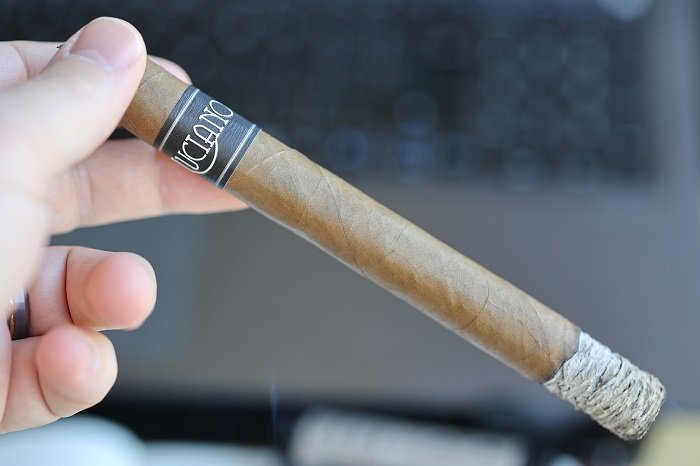 Aaron: As the second third begins, the cedar and mustiness are paired together up front while the baking spice is slightly behind and has a long lingering finish. At a half inch in, the baking spice has transitioned to black pepper and continues with the long finish. The retrohale is musty cedar with light baking spice. At an inch and a quarter, the black pepper is fairly light and the musty cedar remains up front and is slightly drying. As the third comes to a close, the profile remains drying musty cedar and light black pepper. The strength remains at medium.
John: The second third starts with sweet bread, and dry cedar that lingers into the post draw like the first third. Light cocoa defines the retrohale. Some light-plus baking spices with a standout of cinnamon to provide accents as it progresses. The wood reminds me of the mild bitterness of oak you sometimes find in a Scotch or bourbon that has too much cask influence. By the bottom half, the profile is largely wood driven. 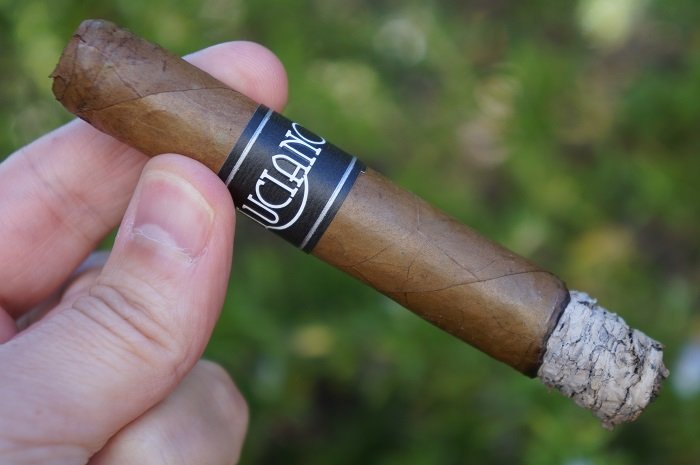 Aaron: The final third continues on with the drying musty cedar while the black pepper in the background has increased slightly. At an inch in, the cedar gains some char. The retrohale is now just musty cedar. The cigar maintains the charred and musty cedar with black pepper in the background through to the end. The strength remained at medium.
John: The last third carries the wood forward nature, with mild bread pushing through at times. Dry wood again remains on the post draw. Some mild cocoa is present on the retrohale as it settles in. Hay moves into the middle of the profile as it progresses. Some bitterness on the post draw some time later. That bitterness takes on an ashy component, and pushes into the main profile. Before the halfway point, a vegetal note has joined the center of the profile. 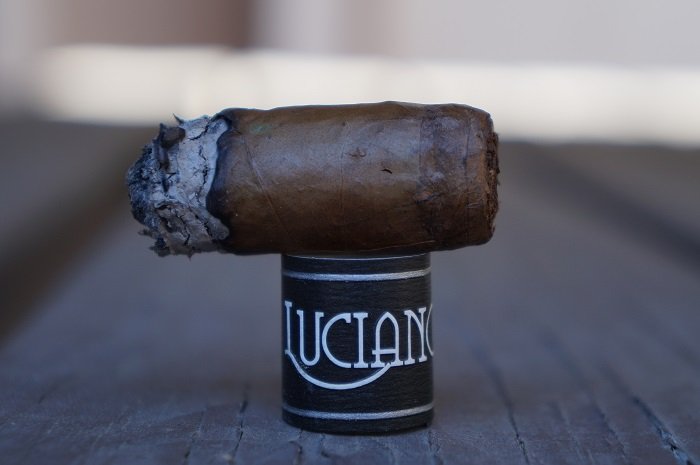 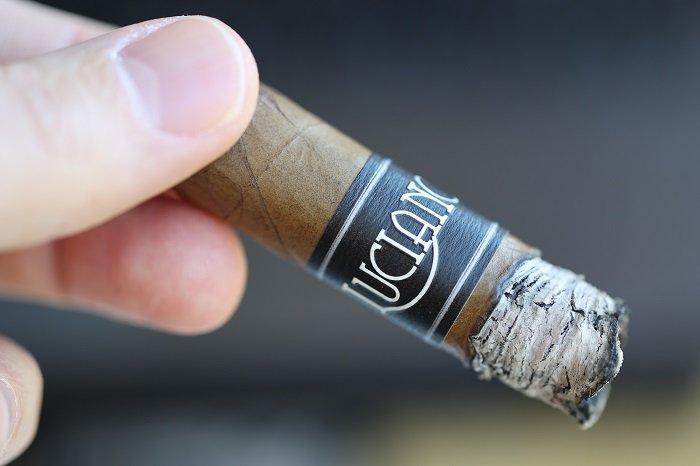 Aaron: The draw was slightly righter than I prefer, but didn’t cause any issues with the smoking experience.
John: The draw is quite resistant, roughly 3-1/2 to 4 notches. Inspecting the cigar, it feels evenly firmly packed throughout.

Aaron: The cigar began with a mix of cedar, baking spice and light vegetal note. The vegetal note was replaced by mustiness fairly quickly. The second third saw the baking spice transition to back pepper. The final third saw some char join the cedar. Construction was very good and strength was medium the whole way. The A.C.E. Prime Luciano The Traveler had a nice start, but dropped down to average in the second third and maintained that level of enjoyment the rest of the way. The price point for this cigar is quite high and with the flavor experience I had, I’m not sure I see myself coming back to this one.
John: I’ve been enjoying working through the offerings from A.C.E. Prime, and the A.C.E. Prime Luciano The Traveler started out quite promising in the first third. By the second third, the flavors became unbalanced and largely wood driven, eventually resulting in unbalanced and harshness in the last third. Construction also suffered somewhat with a re-light and a resistant draw. I can’t help but wonder if the cigar would have reviewed better without the resistant draw, so I’d be inclined to try another one to compare. Total smoking time was 1 hour and 56 minutes.