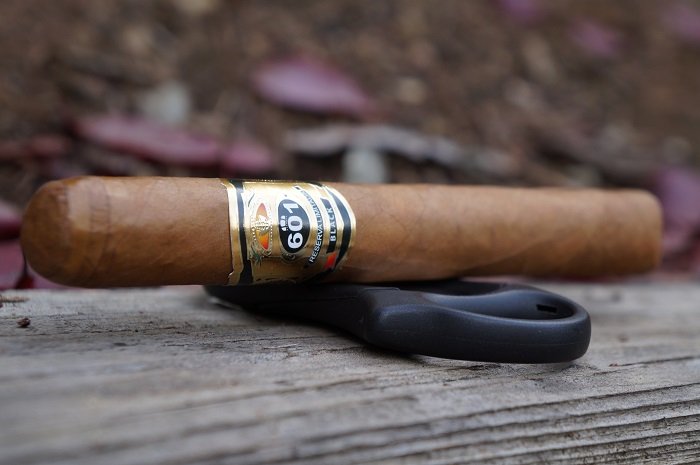 Aaron: The wrapper on the 601 Black Connecticut Toro is light brown and has a few lightly raised and knotty veins. The seams are very smooth and the head is finished with a very well applied set of caps. The band has the newer 601 design, primarily in gold along with black for this variation. The aroma from the wrapper is a mix of cedar and leather and the foot carries the same components along with some added sweetness. The pre-light draw brings a sweet and airy cedar along with a mild spiciness on my lips and the tip of my tongue.
Seth: A beautiful cigar; the wrapper is silky in texture with few veins present. The 601 Black Connecticut Toro has a lovely Natural coloring and is finished with a beautiful triple cap. It is firm throughout and has aromas of raisin, pepper spices, hay, cedar and leather on the foot and wrapper. It doesn’t have that look of an old-school Connecticut, but this is not an old-school Connecticut.
John: The 601 Black Connecticut Toro has no UPC or cigar sticker on the cellophane. The cigar itself features a soft box press shape. Aromas from the cigar included sweet bread, raisin and hay. From the foot, plum and hay.
Jiunn: The 601 Black Connecticut Toro has a silky smooth Colorado Claro wrapper. Veins are well pressed, seams tight, bunch and roll even and head well wrapped. Nosing the wrapper gives the stinkiest barnyard and hay. Aromas from the foot tell rich red pepper spice and cedar. Cold draw gives hay, cedar and herbal tea. 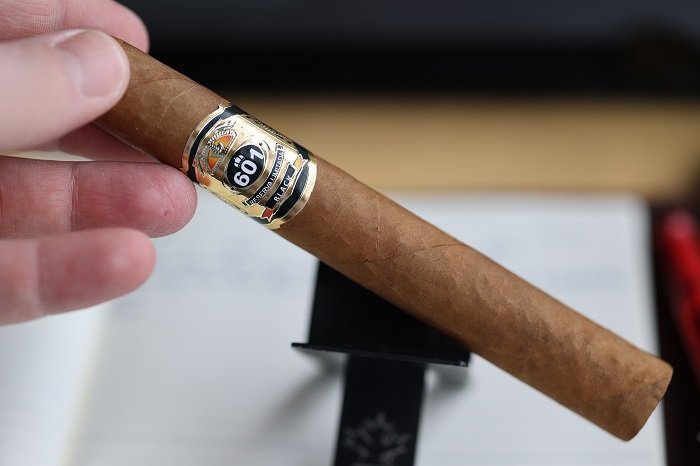 Aaron: The cigar begins with sweet cedar, intense baking spice and mustiness. At a quarter inch in, the baking spices have mellowed in intensity. At a half inch in, the cedar has lost its sweetness. The retrohale brings musty cedar and light baking spice. At an inch and a quarter, the baking spice has transitioned to black pepper. As the third comes to a close, the musty cedar is up front with the black pepper in the background. The strength in this third was right at medium.
Seth: The cigar opens up with a blast of black pepper. There is this creamy and cedar quality present with that, and it has taken me back ten plus years. There are soft earth notes present, almond notes as well, and the cigar is smoking between medium and medium-full.
John: The first third started with bread, cedar and baking spices. Chocolate joins the profile as it settles in. Lingering post draw baking spices and bread form shortly after. A rich complex sweetness underpins the chocolate and cedar, and manages to anchor the flavors together. Some dryness joins the post draw approaching the halfway point.
Jiunn: The cigar starts off equally spicy and creamy. Baking spices and black pepper spice with a creamy backbone. At an inch in, barnyard must and cedar joins the profile. Retrohaling ramps up the black pepper spice and also creates a creamier experience. The finish has a soft black pepper spice. Strength is a tad above medium and body right at medium. 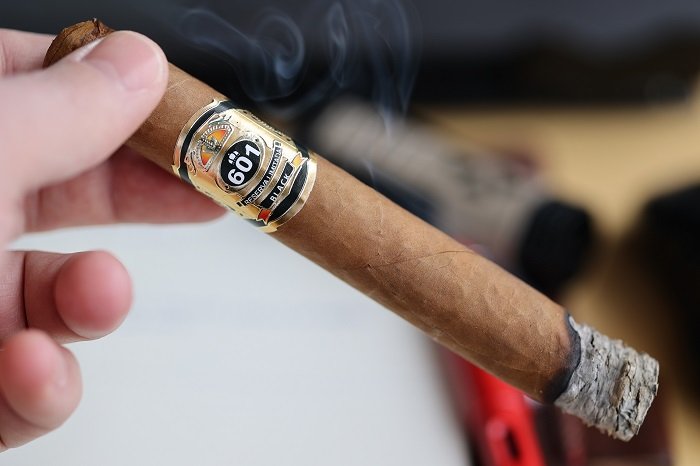 Aaron: The second third sees the addition of some light, dry earth. At a half inch in, the overall profile is becoming a bit dry. The retrohale is musty cedar and light, dry earth. As the third comes to a close, the musty cedar remains up front with the dry earth a bit behind and a light black pepper remaining in the background. The strength in this third bumped up to slightly above medium.
Seth: The second third shows a continuation of the black pepper notes, but they are not as strong as they were in the first. I am still getting those cream and earth notes, and there are some cedar and cocoa powder flavors present as well. Like before, medium to medium-full in terms of body and strength.
John: Milder cedar and chocolate lead the cigar into the second third. The center profile is largely sweetness as the cigar settles into the third. In the bottom half, cedar moves to the front of the profile.
Jiunn: Second third has some pockets of goodness and some pockets of mediocrity. When it’s good, it’s very similar to the first third in that it’s spicy and creamy. When it’s mediocre, it’s mainly just cedar and baking spices. The inconsistency is really throwing me off. Strength moves up to a consistent medium-full, while the body maintains medium. 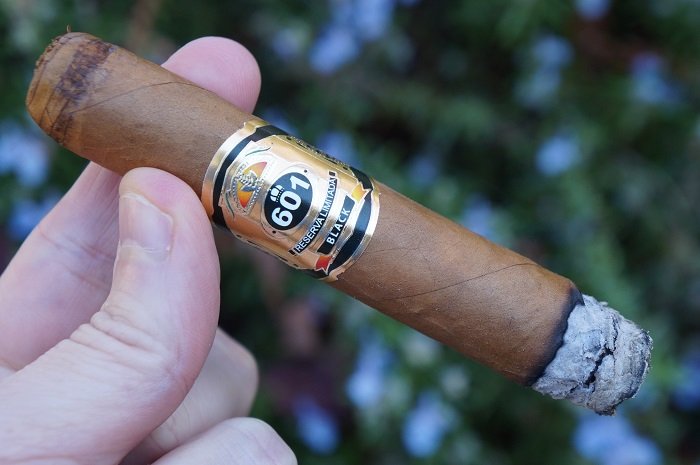 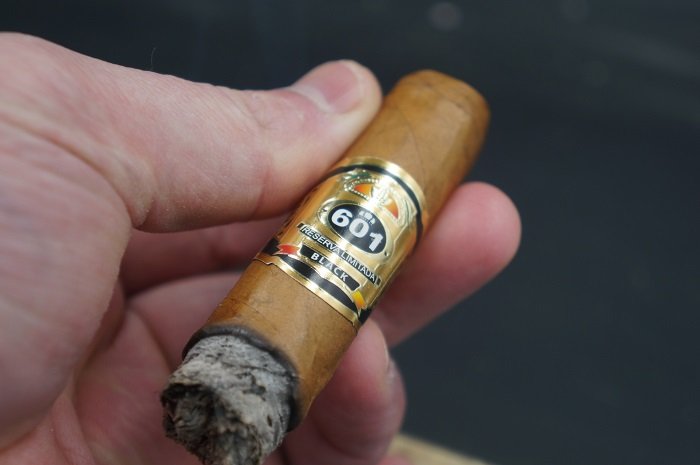 Aaron: The burn was a bit wavy in the first third and was then straight the rest of the way. The cigar went out in the first and second third and required re-lights.
Seth: Burn was good. Not always perfect, but good. No problems throughout.
John: The burn was fairly straight through the cigar experience with the ash holding on up to 1-1/2 inches at times. The burn became uneven going into the second third, requiring a touch-up.
Jiunn: I think burn performance is the culprit of the flavor experience. Smoke production was very low, so I felt the need to constantly purge and baby the burn. The cigar went out on me randomly twice, requiring complete re-lights. 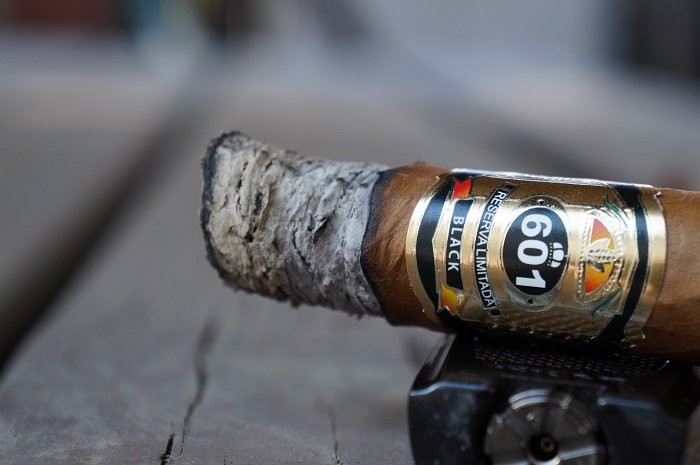 Aaron: The first third had a nice start and the re-lights seemed to take their toll as the flavor profile degraded from there on out. I was really looking forward to the 601 Black Connecticut Toro as I was a big fan of the original release. I will revisit this in hopes of a better burn to see what the overall flavor profile is like and am interested in how the review goes for the others. If the first third is any indication of what the cigar can be, then it might be one to keep an eye on, but I’ll have to see how a revisit goes.
Seth: The 601 Black Connecticut Toro is a very good cigar. I can’t compare it with the 601 Black pre-2010, as it has been over ten years since I smoked one, but this is a very good cigar. It delivers Connecticut qualities, but with more complexity, body and strength. It brings me back to 2007/2008 when manufacturers and brand owners were delivering stronger Connecticut offerings. The days of “this isn’t your father’s Connecticut,” and I love that. It has this old-school nouveua quality which I can get behind. Why this isn’t going to be more readily available is beyond me. This should be the spotlight for Espinosa in 2021.
John: The 601 Black Connecticut Toro offered a dessert like experience through the first and second thirds, with a profile that was much more subdued than what you’d typically see from many Espinosa offerings. The draw was perfect and the burn was very good with only a single touch-up required. I would definitely smoke the 601 Black Connecticut Toro again if I had the opportunity. Total smoking time was 1 hour and 50 minutes.
Jiunn: For the overall experience, I want to double click on my experience with the second third. That is, because of the burn performance issues (low smoke production and cigar going out a couple times), the flavor profile was inconsistent. When the cigar burned right, I believe it was the intent of the cigar, being equally spicy and creamy with a heavier strength profile. The unfortunate part is, the cigar did not burn well at times, which directly affected the flavor profile. That is why it was an overall average experience.