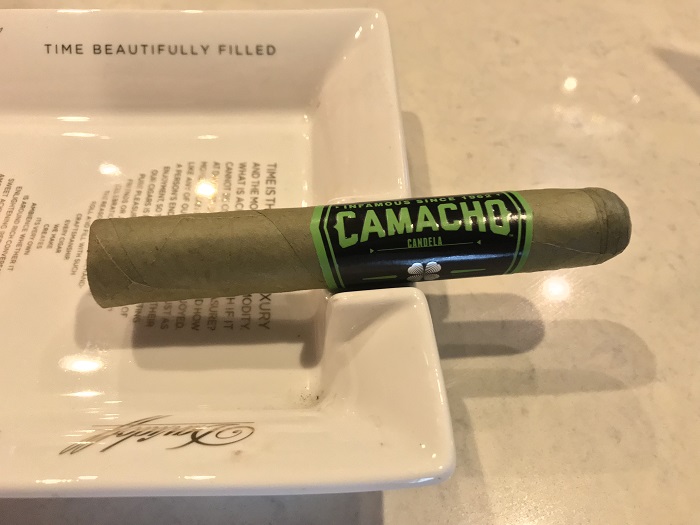 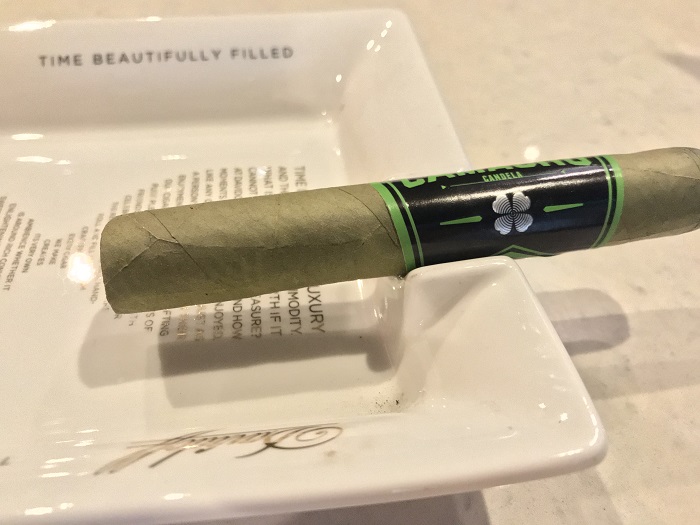 The candela has a nice coloring to it and while it is not a dark green, it has a solid green coloring. There are some candelas where the coloring is very faded and it takes away from the flavor profile. There is a lovely triple cap applied to the cigar and there are few veins present throughout, those present being medium in size. The wrapper is giving off an aroma of light tobacco, grass, cedar and parsley notes while the the foot is giving off a nice sweet richness, raisins, fruit bread and some earthy qualities. It has this sweet oatmeal raisin quality to it. 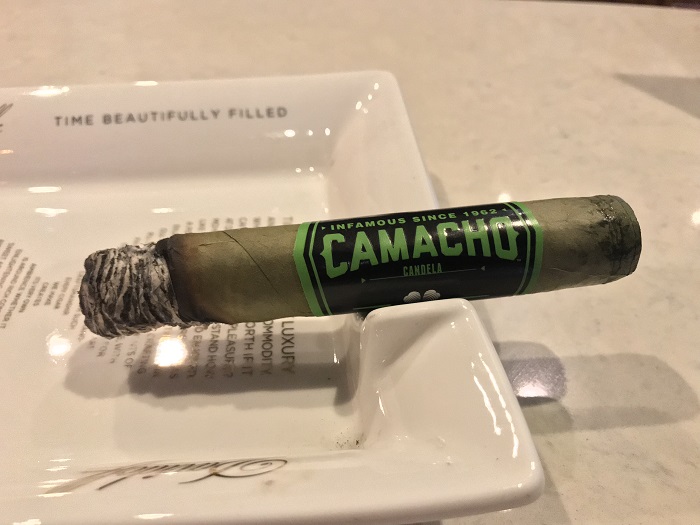 The candela opens up really well and it is delivering those classic candela flavors of grass, hay and cedar, but it is also paired with a nice earthy and peppery spice profile. It really adds to the candela flavor profile and takes the cigar to a different level. There is a slight burnt paper profile with the cigar but it is not a bad addition. I would say the cigar is smoking at a level between mild and medium in terms of body and strength and the flavor profile is a medium profile. The construction is a little off so far, uneven burn line but the ash is holding on well at the end and it is a nice charcoal colored ash. The draw is lovely though and producing a great bit of smoke. 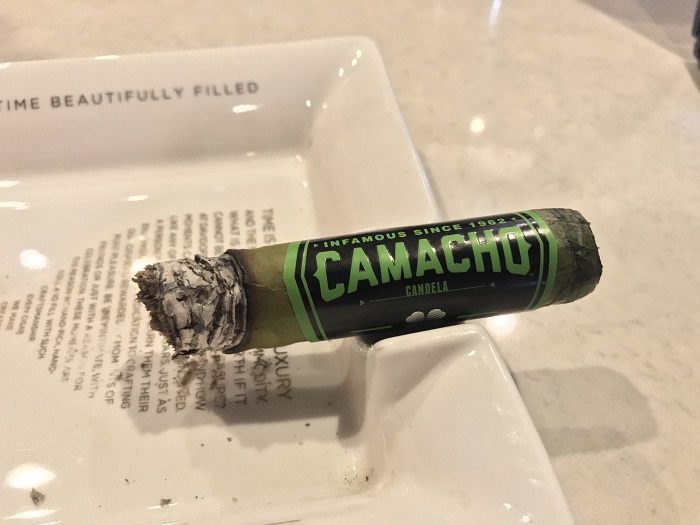 As I enter into the second third, I find the flavor profile remains in line with where it was in the second third. There has not been a great bit of transitioning but the spiciness has faded. It is softer now and focusing on those grassy, cedar and hay flavors. There is a touch of raisin sweetness to it, but it is softer as well. The construction has improved in this third showing an even burn line and the ash has remained on the end fairly firm. I would classify the cigar as being mild-medium in all areas and it is very enjoyable. 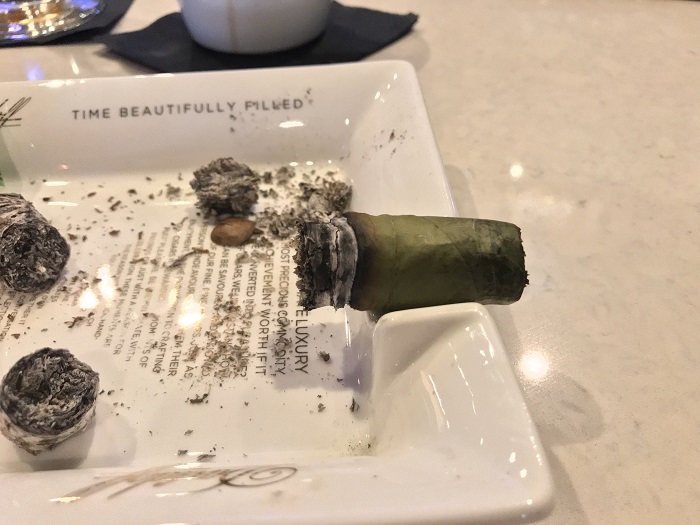 When I enter into the final third of the cigar, I find a return of the peppery spice profile and it is nice to see its return. It is complimenting the grass, hay and cedar notes that have been present throughout and it really brings the cigar to another level. I would say the cigar returns to more of a medium level in this third and it is a mild-medium cigar for strength, body and flavors. The construction remains perfect in this third and it is showing an even burn line with a nice easy draw to the nub. 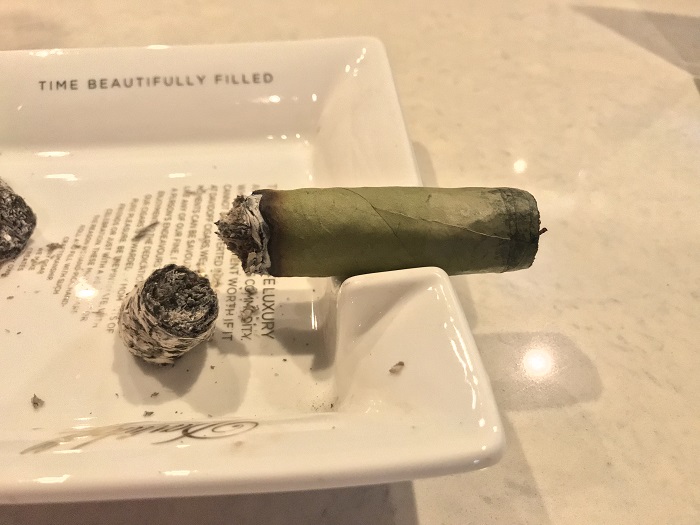 Of the samples I smoked, I continuously had issues with the burn line. They tended to correct themselves, but at times the issues returned. It is a cigar that does not burn great, but is enjoyable nonetheless.

Unlike the burn, the cigar had a nice draw from beginning to end. It wasn’t too loose or snug, and produced a great amount of smoke with each draw. Wrapper and burn issues aside, a nicely constructed cigar.

I am one that enjoys candelas but at the same time will tell you that they can be awful. Like any cigar, you need a good blend but the candelas that have been released with more strength, complexity and body show a lot of great qualities. They offer that candela experience while at the same time deliver something more. I think they are terrific spring and summer smokes, but are often released in March for St. Patrick’s Day and become gimmicky. The Camacho Candela delivers those candela qualities while at the same time shows some peppery and earthy qualities. It had guts, and that is what you need with a candela wrapper to make it successful. I know that candelas are not overly popular and usually have terrible names revolving around the color green, but if you sit down and smoke good candelas I think you would be pleasantly surprised. Do I think they will make a comeback and become popular again? No, but it does not mean manufacturers should not strive to make good ones. I think Camacho should keep it as a seasonal smoke but start to teach smokers to have them in spring and summer and not just for the St. Patrick’s Day. This is a good cigar that I fear will be overlooked because of when it is being released and the awful packaging that comes with it. Candelas are great morning or afternoon smokes and are just something different. With so many Ecuadorian Habano and Mexican San Andres releases, don’t you want something different? Go green this spring and summer and smoke some Camacho Candelas.