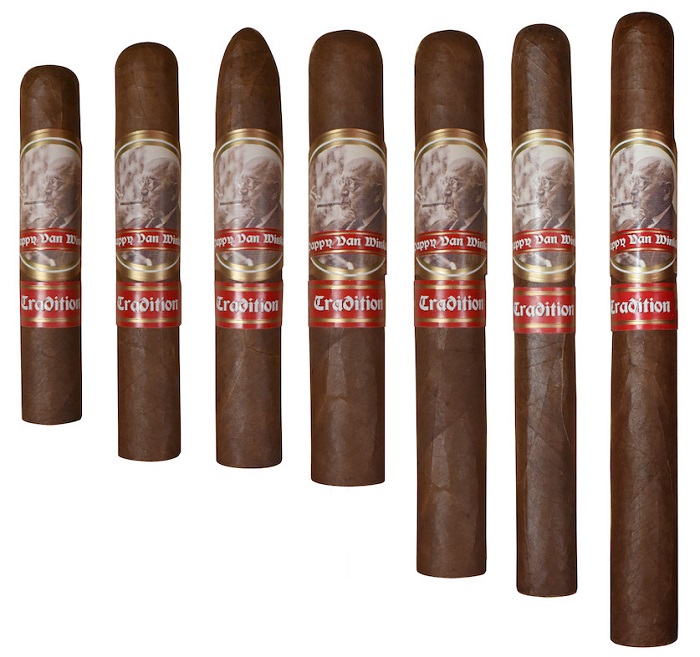 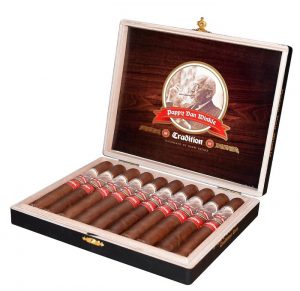 Drew Estate is honored to represent the Van Winkle Family with an ultra-premium cigar that reinforces the legacy of a living American Icon, Julian Van Winkle. The Pappy Van Winkle “Tradition” features an Ecuadorian Habano Oscuro wrapper, Indonesian Binder and aged fillers from Nicaragua and the Dominican Republic.

From Louisville, Kentucky, President of Old Rip Van Winkle Distillery, Julian Van Winkle noted, “I am extremely happy to partner with La Gran Fabrica Drew Estate to produce our new Pappy Van Winkle “Tradition” cigar. We have been working together on this project for a couple of years and I am extremely happy with the blend and incredible level of quality control displayed at the Nicaraguan Factory. Willy Herrera did a wonderful job in the blending of this cigar which for me is one of the best I’ve ever had. The construction of the cigar is second to none. I find that it smokes very evenly, and is a true medium body cigar.”The Pappy Van Winkle “Tradition” is presented in the following expressions:

From Hopkinsville, Kentucky, President & Founder of Drew Estate, Jonathan Drew declared, “The 4th Annual Kentucky Barn Smoker is live and here’s Drew Estate, launching the Pappy Van Winkle Tradition, our second expression with such an iconic brand and family. It’s one of the proudest days of my life …!  Working with Julian Van Winkle and Willy Herrera, as well as our Nicaraguan and Kentucky partners has made this such a rewarding experience. But the completeness, the deep 360, the mega-tron bomb addition – is the support we feel from the brick & mortar retail community and final consumers. That’s what takes it over the top !!!”

The Old Rip Van Winkle Distillery has a four generation history. The Van Winkle family’s involvement in the bourbon industry began in the late 1800s with Julian P. “Pappy” Van Winkle, Sr. He was a traveling salesman for the W.L. Weller and Sons wholesale house in Louisville. Pappy and a friend, Alex Farnsley, eventually bought the wholesale house and also partnered with Mr. A. Ph. Stitzel on the purchase of Mr. Sitzel’s distillery. The three of them merged the two companies and became the Stitzel-Weller Distillery.

In May of 1935 at the age of 61, Pappy opened the newly completed Stitzel-Weller Distillery in South Louisville. Its prominent brands were W.L. Weller, Old Fitzgerald, Rebel Yell, and Cabin Still. Pappy had a heavy influence on the operations there until his death at the age of 91. His son, Julian, Jr. took over operations until he was forced by stockholders to sell the distillery in 1972. The rights to all of their brands were sold to Norton Simon, Inc. Later, United Distillers, who eventually ended up with the Stitzel-Weller Distillery, sold off all of the original labels around 1999.

After selling the distillery, Julian Jr. resurrected a pre-Prohibition label, the only one to which the Van Winkles kept the rights, called Old Rip Van Winkle. He used whiskey stocks from the old distillery to supply his brand. Julian Jr.’s son, Julian, III took over in 1981 when Julian, Jr. passed away. Julian III has continued with the Van Winkle tradition of producing high-quality wheated bourbon. His son, Preston, joined the company in 2001 and the Van Winkles look to continue that tradition for generations to come.