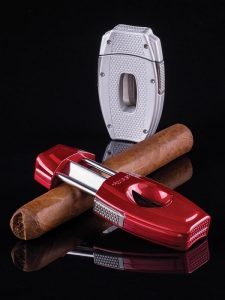 The new VX2 V-Cut offers ergonomic, one –handed operation utilizing the all new Secure-Lock™ system, requiring simultaneous pressure to both side release buttons, to ensure the spring loaded cutter remains secure when not in use. The precision engineered depth of the VX2 V-Cut maximizes draw without cutting too deep and breaching the cigar cap, causing the cigar to unravel. The inverted blade of this new v-cutter provides a 90° cut angle, specifically engineered to cut deeper into large RG cigars while also being able to maintain the structural integrity of smaller RG cigar caps. Flip the VX2 over when not in use, and enjoy a contoured cutter body, so you’ll always have a cigar rest on hand.

“This VX2 V-Cut was developed due to demand from our consumers in the cigar industry” said Kurt Van Keppel, CEO and Founder of XIKAR. “Fans of this notch cut prefer a deeper cut to enhance the draw of the cigar, a challenge to achieve without causing damage to the structure of the cigar. After meticulous engineering, we were able to develop a 90° blade angle on the VX2, which caters to this deeper cut request without limiting cigar ring gauges on which this cutter can be used” Van Keppel continued.

The VX2 V-Cut will begin shipping Fall 2017. Questions regarding this announcement can be directed to Kurt Van Keppel, CEO or David Frazier, VP of Sales at XIKAR.

Based in Kansas City, Missouri, XIKAR is the leading cigar accessory brand. Creator of the revolutionary and iconic Xi1 cutter, XIKAR sells product in thousands of retail locations around the world.

In 1994, Kurt Van Keppel wanted to buy a good cigar cutter, but found that both the inexpensive and high-end models underperformed. So, he set out with Scott Almsberger to match good design (ergonomics and function) with the best styling and materials. The result was the Xi cutter, launched in 1996. On October 21, 2014, the United States Patent and Trademark Office determined that XIKAR’s Xi Cutter had achieved iconic status, and awarded it with a trade dress Trademark #4,623,391. The Xi cutter design is protected from duplication indefinitely.