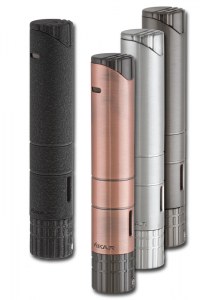 Kansas City, MO – July 10, 2017 XIKAR, Inc. is proud to introduce the Turrim Single lighter. Built on the same principles of the 5×64 Turrim double flame, the Turrim Single provides a thinner, shorter body with a powerful single flame. This small but mighty lighting tool combines ease of use with extraordinary detail and performance to exemplify XIKAR’s principal promise of superior function, form, feel and finish.

The sleek, elongated shape of the Turrim Single encases an extended fuel tank for maximum fuel capacity. As seen in the Turrim Double, this single flame version features the advanced engineering of the Ratcheting Fuel Adjustment System and EZ-View™ Red Fuel Window technology to effortlessly view and control flame capacity. The Turrim Single’s unique shape fits comfortably in the hand at the size of a 4.5x50RG cigar and conveniently fits into a cigar slot in a travel case for easy portability, so you never find yourself without a reliable light.

“The unique cylindrical shape and exclusive features of the Turrim Double lighter led it to be an instant success among smokers who enjoy the style of their accessory as much as their cigar” said Scott Almsberger, XIKAR EVP and CDO. “The addition of the single flame model offers a condensed size and enhanced precision flame, packing all the power you’d expect from a XIKAR lighter.”

Questions regarding this announcement can be directed to Kurt Van Keppel, CEO or David Frazier, VP of Sales at XIKAR.

Based in Kansas City, Missouri, XIKAR is the leading cigar accessory brand. Creator of the revolutionary and iconic Xi1 cutter, XIKAR sells product in thousands of retail locations around the world.

In 1994, Kurt Van Keppel wanted to buy a good cigar cutter, but found that both the inexpensive and high-end models underperformed. So, he set out with Scott Almsberger to match good design (ergonomics and function) with the best styling and materials. The result was the Xi cutter, launched in 1996. On October 21, 2014, the United States Patent and Trademark Office determined that XIKAR’s Xi Cutter had achieved iconic status, and awarded it with a trade dress Trademark #4,623,391. The Xi cutter design is protected from duplication indefinitely.