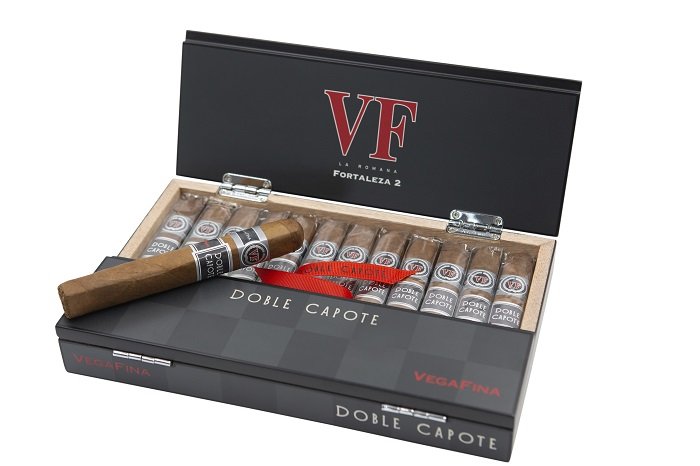 VegaFina continues to innovate with “Doble Capote”, its new limited edition framed into the Fortaleza 2 line, which offers aficionados a selection of cigars that, as its name suggests, count with two binder leaves from different origins.

This technique, developed by the Tabacalera de García master blenders for special occasions, is distinguished by adding an extra point of complexity to the blend, resulting in a cigar which is specially interesting for those who look for a more intense smoking experience. In its elaboration, the master blenders have used leaves from the Dominican Republic in the filler, which count with 4 years of aging; two binders from the Dominican Republic and Nicaragua, carefully selected from the best tobacco regions of each country; and an attractive brownish-red Ecuadorian wrapper, that stands out for its shine and its silky touch.

The vitola chosen for this occasion is a Magnum Extra, 54×149 mm (5.87 inches) cigar that introduces the innovation of being the brand’s first “box-pressed” cigar. This process, that in Tabacalera de García is made by pressing the cigars in molds for a period of 30 minutes to 1 hour, requires thorough work by the factory team in order to achieve the proper shape in each cigar. The result is, according to the experts, a slower and more homogeneous burn that beautifully enhances and intensifies tobacco flavors.

VegaFina Fortaleza 2 Doble Capote is presented in an original box in which, both its shape with two lids and its design with squares, refer to the concept itself. The cigars are dressed with the line’s cigar band and with an additional one specially created on this occasion.

This limited edition will be available worldwide (excluding the United States) in the next few months.