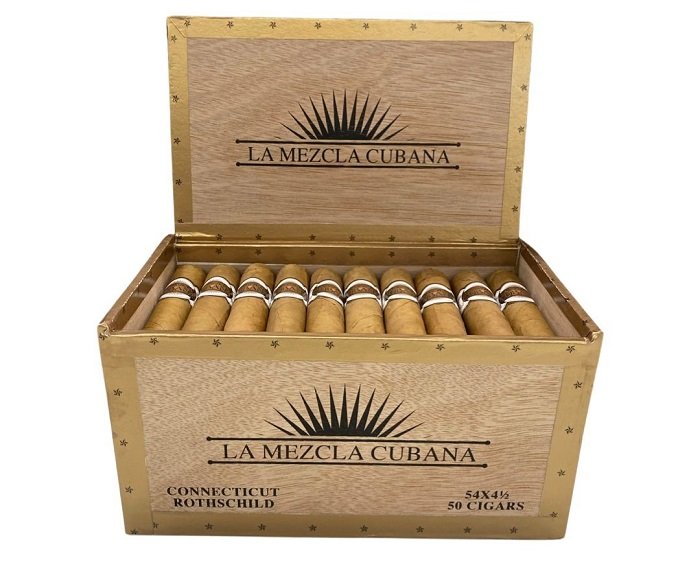 Nashua, NH – A rejuvenation of the La Mezcla Cubana line is ready for its relaunch at the 2022 TPE Show in Las Vegas, NV. With a comprehensive portfolio that offers a blend for every palette, United Cigars is offering another line with a budget friendly price. First debuting in 2006 through Cigar Agency, La Mezcla Cubana was sold throughout the United States until 2013 when United Cigars bought the brand. Today, La Mezcla Cubana is produced at the Magia Cubana Factory in Gurabo, Dominican Republic. The relaunch comes after a Zoom call uncovered an opportunity to purchase 7-year-old Ecuadorian wrapper leaf from A.S.P. Enterprises, a family-owned tobacco farm in Ecuador.

Offered in boxes of 50 cigars, the La Mezcla Cubana Rothschild measures a stout 4 ½ x 54 and offers a mild-to-medium profile. Meaning “Cuban Mix,” the 7-year-old wrapper is Ecuadorian Connecticut Shade with an Indonesian binder. Dominican, Nicaraguan, and Pennsylvanian leaves are used in the filler along with a proprietary blend by Magia Cubana.

“This is wrapper leaf that had been aged for seven years and was selected for some luxury lines,” shared Oliver Nivaud of United Cigars. “Fortunately for us, the wrapper was only big enough for a short vitola, so it was perfect for our Rothschild.”

With the relaunch of La Mezcla Cubana at the TPE Show, retailers will have a first look at the line that is currently only available in a Rothschild format. MSRP is $299.99 for the box of 50 cigars and $5.99 per cigar. United Cigars has begun taking orders and the cigars should start shipping to retailers mid-February.