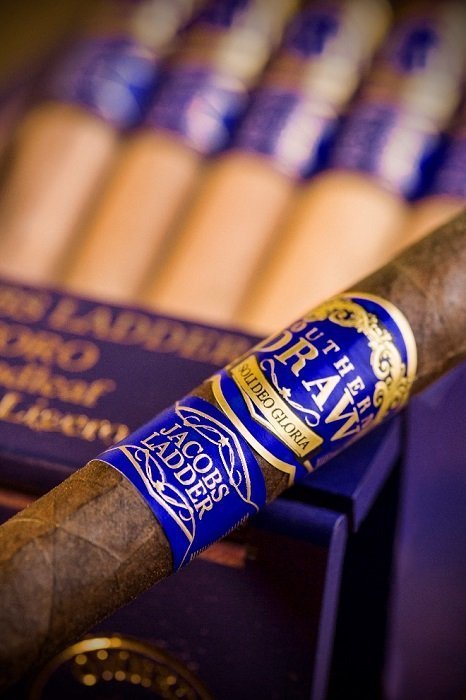 Southern Draw Cigars’ boldest blend will rain down its vivid interpretation of wrath with the Jacobs Ladder – hail, fire and brimstone – the names applied to each of its triple ligero filler tobaccos.

Brimstone, a moniker referencing the Bibles’ passages about fiery torment, is the fifth size of the Jacobs Ladder and uses a patiently aged Pennsylvania Broadleaf USA wrapper, a Maduro USA binder and a potent new filler combination consisting of three different ligeros from Nicaragua and the Dominican Republic. The Brimstone is a very full bodied, full flavored bomb that burns uniformly and yields a beautiful white ash. The company believes this new size of Jacobs Ladder remains #boldbutapproachable and it is hand-made by AJ Fernandez Cigar Co. in Esteli, Nicaragua.

Jacobs Ladder is the popular cigar blend named in part for Ethan Jacob, the son of Founders, Robert & Sharon Holt. A limited number of samples of the new 6.0×56 perfecto will ideally be available from the hands of Ethan Jacob who has plans to share this line extension with media members and current valued retailer partners of Southern Draw Cigars. The unveiling of the Jacobs Ladder – Brimstone (the name was shortened to fit on the secondary bands and boxes) is scheduled for June 30, 11 a.m. in Booth #3061. The company is keeping images of the new releases under wraps to further benefit those that attend IPCPR.

The Jacobs Ladder – Brimstone will be available in the 6.0×56 perfecto size and will be priced at $11.99 MSRP, available in 20 count boxes and 20 count refill bundles. Total production for 2019 is 75,000 cigars and is scheduled to be released in equal amounts in July, September and November. Shipping dates are subject to our stringent quality control process.

The Brimstone is only available to current valued retail partners of Southern Draw Cigars (account must be in good standing) and will be sold on a first come, first served basis beginning at the official unveiling.