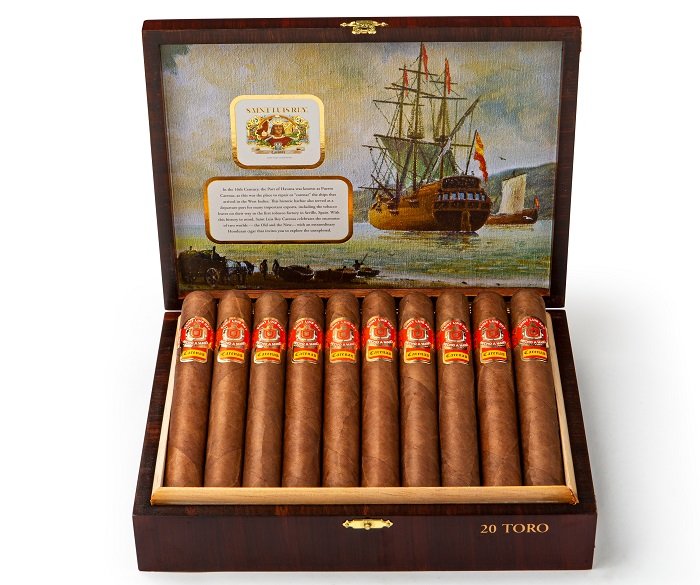 FORT LAUDERDALE, Fla. – Paying tribute to the Port of Havana, which was known as Puerto Carenas in the early 16th Century, Altadis U.S.A. is reinvigorating its Saint Luis Rey brand by introducing Saint Luis Rey Carenas. The cigar is slated to sail into stores in April.

In the 16th Century, mariners sailing to the West Indies would have to repair or “carenar” their ships. The historic harbor of Puerto Carenas, now known as the Port of Havana, was a place to seek repairs, but also served as a departure port for many important exports, including the tobacco leaves destined for the world’s first tobacco factory in Seville, Spain.

This rarely told story about the early days of tobacco trade is central to the packaging design used for Saint Luis Rey Carenas. The 20-count boxes, adorned in traditional gold accents and heritage of Saint Luis Rey branding, dons an impressive open box presentation. The packaging visually transports aficionados to a moment in history with an illustration of a 16th century Spanish ship making port in historic Puerto Carenas.

Created by the Grupo de Maestros of La Flor De Copan, the Saint Luis Rey Carenas is a flavor-packed smoke of earthy spices and salty notes making this a solid medium-bodied cigar. The cigar offers an impeccably smooth draw with an oily Nicaraguan wrapper. These decadent sticks with their immaculate appearance invite adult cigar aficionados to take a trip back to the heritage of the Saint Luis Rey brand.

Saint Luis Rey Carenas celebrates an encounter of two worlds — the Old and the New— with an extraordinary cigar that invites lovers of tradition to embark on a cigar experience that transcends time.