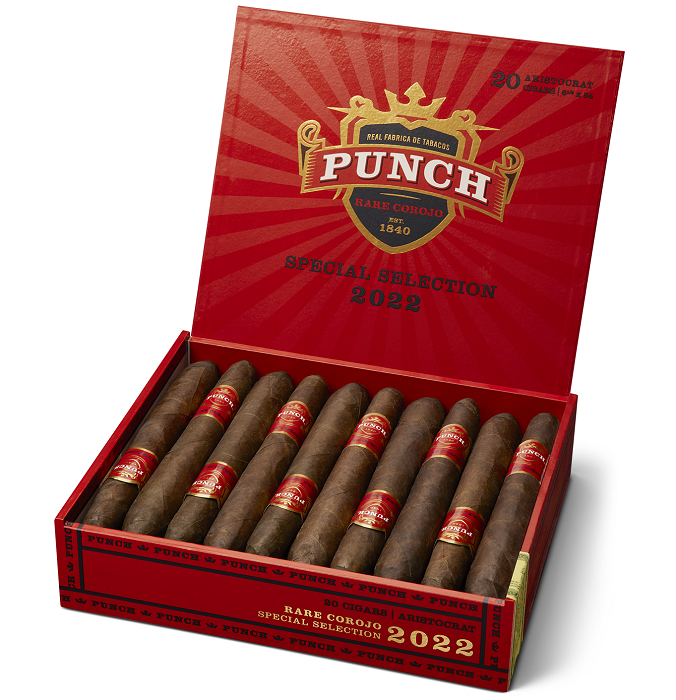 Punch Rare Corojo strikes again. The seasonal collection has begun making its annual return to retail earlier this month, with a frontmark pulled from the Punch archives.

The 2022 release of Punch Rare Corojo marks the addition of Aristocrat, a burly 6.125” x 40/54 figurado. This special size was originally made at the Villazon factory, commissioned by Frank Llaneza who founded Punch in Honduras. Frank made what he referred to as a baseball bat-size cigar for Red Auerbach and Art Rooney, two sports legends.

Ed Lahmann, senior brand manager for Punch said, “The ‘Aristocrat’ size was almost forgotten. Lucky for us, as we were looking back in the archives of Punch, we learned that this size hadn’t been made in decades. Further digging in the factory turned up 80 molds for this special size which is just what we needed for a limited edition smoke. This is our way of giving a nod to Punch Rare Corojo’s 20 year reign as the original seasonal cigar and paying tribute to the roots of the brand.”

Reintroduced in 2001 after a shortage of wrapper leaves caused the product to disappear at retail for several years, Punch Rare Corojo is released annually and is the premium cigar category’s first seasonal cigar. The cigar is crafted with a lustrous Sumatra wrapper cultivated in the mountains of Ecuador. Grown only in limited quantity, these rare, reddish leaves give Punch Rare Corojo its uniquely smooth taste. Bound with hearty Connecticut Broadleaf, the blend features Nicaraguan, Honduran and Dominican tobacco and delivers a layered smoking experience with notes of spice, chocolate, wood and earth.

Punch Rare Corojo is made at HATSA in Honduras.