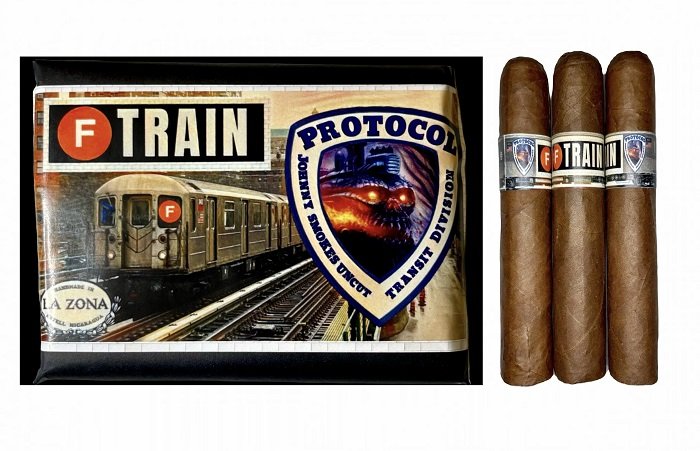 It has been fully documented that Protocol Cigars prides itself on its engagement and connection to Cigar Groups. Protocol Cigars’ philosophy is that these cigar groups are an important and vital aspect of the cigar industry, being as important as retail stores and cigar manufactures. Once again Protocol Cigars adheres to this philosophy with its latest limited edition release. Protocol Cigars is honored to release the second cigar for Johnny Smokes Uncut cigar group: The Protocol F Train. The Protocol F Train joins the list of other releases for cigar groups. The first was the Fat Ash, which had 3 renditions, then there was the 5 Families, which was created for 5 cigar groups including Distinguished Ruffians, Fat Ash, Smoke House Gorillas, Sheep Dog, and BOTL PA Chapter. The last one was the Protocol J Train.

Johnny Smokes Uncut Cigar Group was founded by John Remer in 2020. John has been an avid cigar smoker for well over 20 years. He loves cigars and his passion continues to grow with every passing year. In a very short time the group has grown into over 4,700 members, spanning over 85 countries. John goes on live from the Facebook Group several times a day and the engagement is very high. Johnny Smokes Uncut has 2 weekly shows that goes live on Facebook. On Thursdays there is JSU Live and on Sundays is the JSU Fireside chats. Both shows have hosted some of the biggest names in the cigar industry. JSU has monthly cigar manufactures that sponsor the group and have a lot of fun. “John has created something extraordinary. The group continues to grow. We couldn’t be happier releasing another cigar for Johnny Smokes Uncut!” said Kevin Keithan co-owner of Protocol Cigars. John Remer added “I’m extremely happy and excited about the F-Train. This was the perfect follow up to the highly successful J-Train. I hope everyone enjoys them as much as I do!!!”

The Protocol F Train is made at The La Zona Cigar Factory in Esteli, Nicaragua. The cigar will be a Robusto 5X52 with a Nicaraguan Habano Rosado wrapper, a Nicaraguan binder, and Nicaraguan fillers with the ligeros and viso from Esteli and Jalapa. The cigar is a solid medium plus on the body with some sweetness, slight cedar aroma with a creamy finish and some pepper. The cigars come in a 10 count paper bundles with an MSRP of $95.00 per bundle. The F Train’s initial release will be limited to 200 bundles with the possibility of more in the future. The initial release will be on Friday, June 10th on line at 12 noon and in store at New Tobacco Village starting at 5pm. After the release the F Train will be available to a few Johnny Smokes Uncut retail partners. “The cigar is delicious. It’s another great cigar blended by Hector Alfonso Sr. and made by our great partner Erik Espinosa. If you liked the sold out J Train then you are going to love the F Train!” closed Juan Cancel, founder and co-owner of Protocol Cigars.