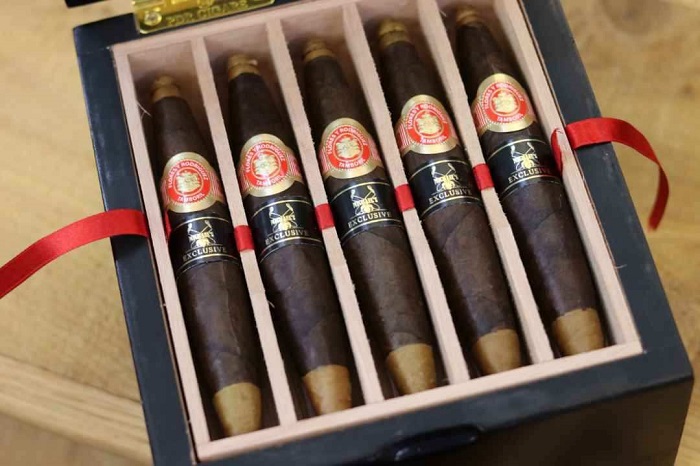 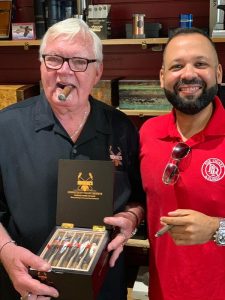 Highly regarded as one of the best cigars made by PDR Cigars, The CVR Connecticut Broadleaf Maduro has been awarded numerous awards across the cigar industry. This limited edition cigar releases once a year, and in limited quantities.

Enter the CVR 6×60 Double Perfecto. Mike Peacock has long been a fan of the double perfecto size. And as a huge fan of the CVR Broadleaf Maduro, he was curious how it would translate. Local PDR Sales rep, Scott Lewis, took the idea to PDR Mastermind, Abe Flores. His curiosity piqued, he had some rolled…. And we waited…. Six months of resting … And the results were glorious.

In addition to being covered with an oily Connecticut broadleaf maduro wrapper, the cigar features a double binder of Ecuadorian corojo and Nicaraguan Habano. The filler includes tobacco from Condega and Criollo 98, and Corojo from the Dominican.

While the original sizes were outstanding, the Double Perfecto takes it to the next level. The cigar starts with hints of black pepper and cedar notes and transitions to deep hints of espresso and dark chocolate. A complex taste of cedar, tree nuts, and cocoa come through as the cigar opens to the first half. As the cigar passes its apex and begins to narrow back down, the black pepper reemerges, but the cocoa and coffee remains, creating a complex cacophony of flavor that tantalizes the palate.

A great cigar deserves a great presentation. This limited edition Michaels Exclusive comes in a 15-ct Mahogany Lacquer box with polished brass hinges. The Michaels Tobacco Logo adorns the lid in gold foil. Each cigar is separated by its own cedar divider, five wide and three deep. The band is the original FyR CVR Maduro band, but also features a beautiful gold foil secondary band exclaiming the cigar as a Michaels Exclusive.

Of course, as an exclusive, this cigar is ONLY available at Michaels Tobacco of Euless and Keller. They are slated to be available on October 15, 2018.