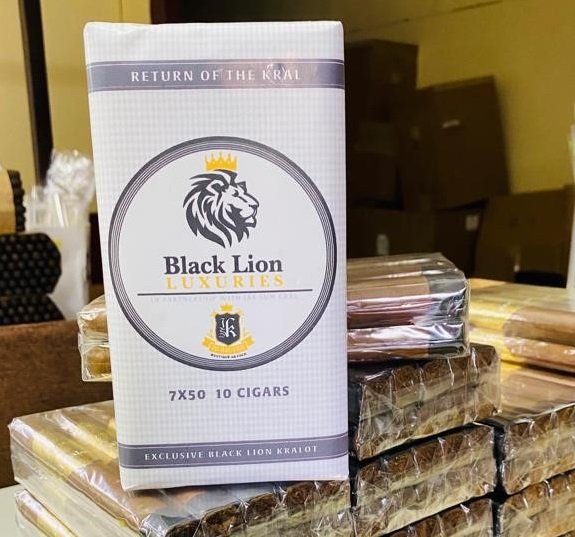 The Kralot Black Lion Luxuries Club Exclusive is a 7 x 50 Churchill. Kralot was the name of Jas Sum Kral’s first limited edition which was released in 2018. The Kralot Black Lion Luxuries Club Exclusive differs from that original release in that it uses an Ecuadorian Habano wrapper instead of a San Andres wrapper. The Kralot has a double binder from Ometepe and Somoto, both tobacco producing regions of Nicaragua. The filler comes from Condega, Estelí, and Jalapa. The cigars are made at Tabacalera Aragon. The cigars are available in five-count and ten-count bundles for $74.99 or $149.99.

James Garcia from Black Lion Luxuries says “In looking for a few companies to bring our vision of boutique cigars exclusively for Black Lion Luxuries in 2022, we were fortunate to partner with Riste and Jas Sum Kral (JSK). It’s no secret that the past few years have been tough on the production and fulfillment of cigars, but JSK was able to make us a priority, fitting us into their production schedule and securing the tobacco to make this cigar a success, while not rushing the final product.

When talking with Riste about bringing back one of his most successful and sought-after releases – the Kralot – he was able to create a blend that allowed both JSK and Black Lion Luxuries to be proud of. In replacing the San Andres Maduro with an Ecuadorian Habano, and tweaking the binders and filler, JSK has delivered a cigar that is well balanced and offers a complex array of flavors as it transitions.”

Riste Riatevski added “Black Lion Luxuries wanted a cigar that wasn’t pre-made. A lot of brands offer pre-made cigars, blends that are on the shelf or cigars that are already made. I don’t, when someone comes to me with a request, we start working together. Black Lion Luxuries had the right mindset, they wanted to do it right. A cigar specially made for them, nothing that was ready to go, and then give the cigar enough time to age instead of rushing it to the market. With that mindset they are a perfect fit for what we like to do at JSK Cigars.”