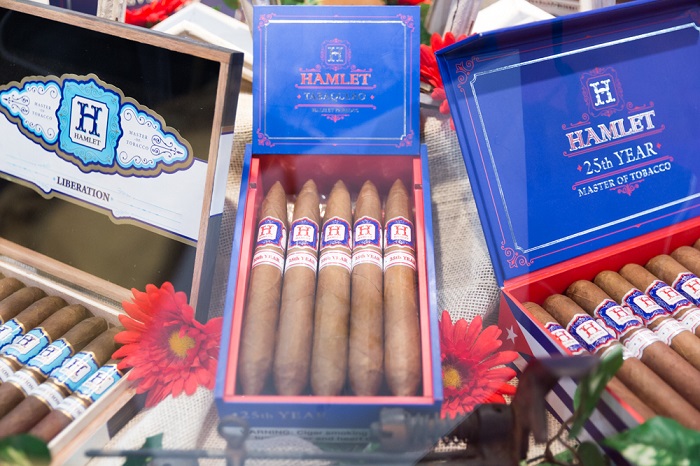 Hamlet 25th Year Salomon will join the brand’s Robusto, Toro and Sixty lineup that debuted in Q3 of 2017. Based on its ongoing success, Paredes decided in the spring of 2018 to take that medium bodied cigar blend and roll it into a distinctive Cuban shape. The result is a 7 5/8-inch pointed figurado that swells to a maximum ring gauge of 58 at its bulb.

“The Salomon shape has always been my signature shape to roll,” explained Paredes. “I already have a Salomon for my Tabaquero cigar brand. And it’s always been very popular. So earlier this year, I rolled the 25th blend into the same shape. Rocky smoked one, looked at it, and said ‘this is really good.’ That’s where it began for this new Salomon.”

As with the other medium-bodied Hamlet 25th Year sizes, the Salomon is rolled at Rocky Patel’s TaviCusa factory in Estelí Nicaragua. It’s packaged in 10-count boxes, and it retails for $11.00.

The Hamlet 25th Year brand honors Paredes’ quarter century achievements in the premium cigar industry, including his numerous years at the Partagas factory in Havana, Cuba. It was in Cuba that Hamlet honed his mastery of blending and rolling cigars “free hand,” which is the process of hand rolling a ready-to-smoke cigar from scratch, without molds or presses.