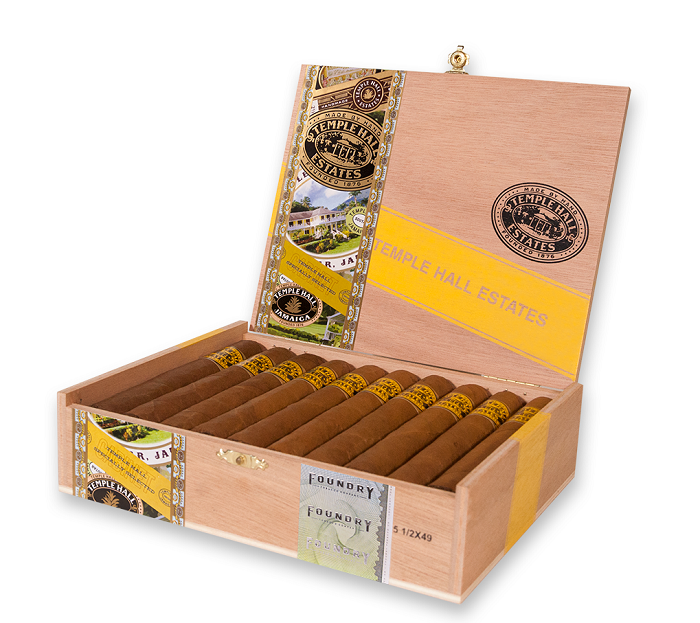 History takes many forms, from words in books to stories handed down through generations.  Foundry Tobacco Company’s new Temple Hall Estates collection is a story of heritage, best told through smoke.

The Temple Hall Cigar Factory was born of necessity.  During WWII, England needed to keep its currency within the commonwealth to support the war effort.  As the Brits were among the world’s largest buyers of Cuban cigars at that time, many Cuban cigar masters expatriated to British-held Jamaica to continue to supply this important market.  The Temple Hall cigar factory quickly became a big-time player. Years later, when the Castro regime took control of Cuba, Ramón Cifuentes, the father of Partagas, assumed the day-to-day operation of the factory. His legendary attention to detail and exacting standards quickly put Temple Hall on the map, and it became known as one of the world’s premier cigar factories.

When the Temple Hall factory was acquired by General Cigar in the 1960s, Edgar Cullman, then chairman of the company, saw tremendous promise in Ramón and ultimately transferred him to the Dominican Republic where he played a pivotal role in developing the company’s strict standards for cigar making and quality assurance.

Justin Andrews, sales manager for Foundry Tobacco Company had this to day about the brand, “Temple Hall Estates pays homage to the factory in Jamaica, and the people who shared Ramón Cifuentes’ love for the art of cigar making.  This new line is made in Santiago, DR, according to the techniques set forth at Temple Hall by Ramón.”

A silky, elegant and flavorful smoke reminiscent of the cigars crafted at Temple Hall under the tutelage of Ramón Cifuentes, Temple Hall Estates is made with a Connecticut Shade wrapper over a Mexican San Andrean binder.  Proprietary Dominican Piloto Cubano leaves grown in Mao, DR and harvested from all three grades (volado, seco and ligero) and Mexican San Andrean long fillers round out the blend and deliver enticing notes of earth and cedar.

Temple Hall Estates is available in four classic sizes listed below, and is now shipping to cigar retailers across the U.S. The brand will be supported with in-store educational events beginning in March and taking place at cigar shops across the country.