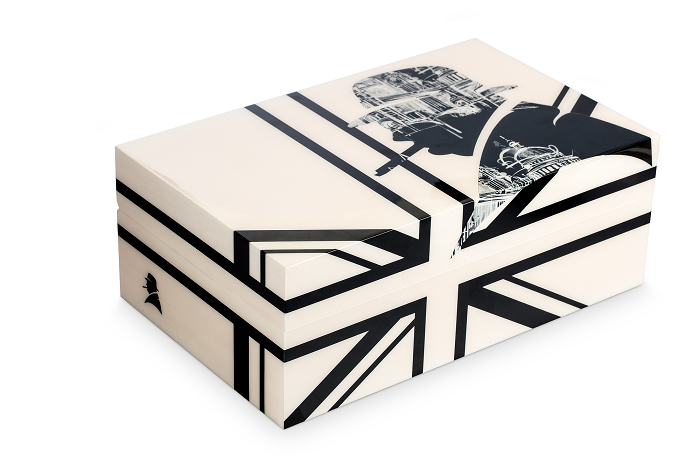 Basel, June 2017. Following the relaunch of the Davidoff Winston Churchill Cigars in 2015, Davidoff unveils a contemporary accessory line bearing the name of and inspired by one of the facets of the world’s most iconic cigar aficionado – his long serving role as a statesman.

“The aim was to craft a new range of contemporary Davidoff Winston Churchill accessories inspired by a key facet of the man himself – his statesmanship. Sir Winston Churchill’s leadership role in British politics for over 55 years, as well as his well-known fondness for fine cigars and Scotch whisky, were a great source of inspiration for Davidoff’s teams of designers and craftsmen. The attractive designs of this new range, as well as Davidoff’s unparalleled technical expertise, will make the cigar ritual and the enjoyment of today’s discerning aficionado,” explained Charles Awad, Senior Vice President – Chief Marketing Officer at Oettinger Davidoff AG.

Randolph Churchill, Sir Winston’s great-grandson, added: “In the evenings, after dinner, when Sir Winston was having a good whisky, he’d light a cigar. He was passionately dedicated to his cigar ritual in great detail, and he mastered his skill to light up and fill his best and darkest days beautifully in exactly the same way.”

As a statesman, Winston Churchill has led Britain and influenced the world’s history over the course of his illustrious career. Davidoff Cigars wishes to celebrate this facet of his character with a contemporary and unexpected Winston Churchill accessories line.

THE DAVIDOFF HUMIDORS, INSPIRED BY SIR WINSTON CHURCHILL – THE STATESMAN

The Ambassador and Primos humidors that belong to this line reflect Winston Churchill’s unique wit and daring spirit: bright and strong colours, unmissable and full of character. 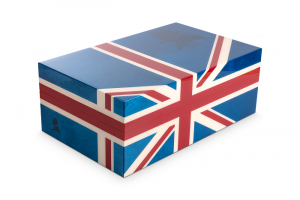 As a tribute to Sir Winston Churchill, the British statesman, and his strong character, Davidoff is introducing this intense design depicting the Union Jack on blue birch wood and reflecting the Winston Churchill icon in a piece of marquetry made of a darker shade of tulip wood.

As a statesman, London was Sir Winston Churchill’s command centre and his strong impact on the city cannot be denied. From official statues to street art, the capital city of the United Kingdom is full of memorials and reminders of this powerful icon. Such a versatile city as London embodies the many facets of Sir Winston Churchill and inspires the “London” design, showing the city landscape within the Winston Churchill profile on a beige tulip wood.

With a capacity for between 70 and 90 cigars, the sleek, linear Ambassador is created for cigar aficionados with a large assortment. The interior contains a tray, a removable basket and dividers that allow the cigars to be arranged.

With a capacity for between 25 – 35 cigars, the smaller Primos is perfect to build a first collection or as a second, compact humidor, ideal for the office or anywhere, to ensure your favourite cigars are always in the best condition for enjoyment.

Ambassador and Primos humidors are both available in two graphical styles as well as in the Union Jack and London designs.

The Davidoff Winston Churchill humidors are made by a French atelier that is part of the Living Heritage Company (Entreprise du Patrimoine Vivant), a label known for the excellence of its traditional expertise. Both humidors are handmade and contain the Davidoff Slim Regulator. Davidoff regulators maintain a stable relative humidity level of 70% to 72%. These regulators are designed and crafted by Swiss engineers with a 2-way humidity system, to release or absorb humidity and guarantee a stable humidity level. The humidor interiors are made of okoumé, a wood from Gabon, on Africa’s west coast. Okoumé is odourless and tasteless, and ensures that no wood “flavours” are transferred to the cigars. It is also hand-varnished to seal in the humidity and prevent it from being absorbed by the wood. 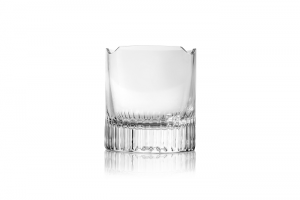 Inspired by Sir Winston’s Churchill affection for cigars and whisky as he led Britain, each glass is fitted with a unique feature: two notches on the side of the glass to hold your cigar – a first in the cigar world. A nifty feature that leaves you a free hand to greet someone, share your latest cigar review on social media or simply post the perfect pairing picture. Moreover, the Winston Churchill silhouette is discreetly sandblasted at the bottom of the crystal glass.

These are available in a set of two glasses – the perfect gift for every aficionado. These exclusive handcrafted cigar liquor glasses are made in Western Europe by highly skilled glass blowers working for a small atelier that has 120 years of glass making experience.

Davidoff’s Winston Churchill celebrates the British Statesman with a Union Jack pattern in the design of this porcelain ash tray.

These ashtrays are crafted in the tradition of the best porcelain in the French porcelain capital, Limoges, by a French atelier that is part of the Entreprise du Patrimoine Vivant (Living Heritage Company), a label recognising the excellence of its traditional knowledge.

The Winston Churchill icon is gold-treated, while hints of the Union Jack adorn the side of the ashtray in a mix of matte beige and brilliant gold. The ashtray has two slightly angled cigar notches to ensure the two cigars will not touch each other. Its large bottom holds a generous volume of ashes.

The porcelain ashtray inspired by Sir Winston Churchill –The Statesman is a limited and numbered edition (only 115 pieces have been produced globally). Each ashtray is numbered by hand.

The Davidoff accessories line, inspired by Sir Winston Churchill – The Statesman, will be launched globally starting in August 2017.