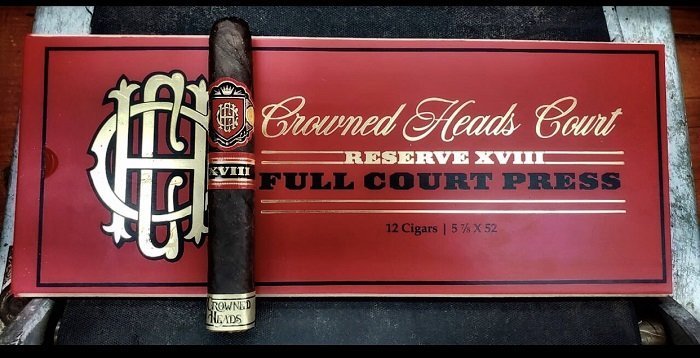 In 2018, Crowned Heads released a brand inspired by and dedicated to its loyalists (the Crowned Heads ‘Court’) known as CHC Reserve XVIII.

CHC Reserve XVIII went on to receive high accolades (Developing Palates’ review here), and was included in numerous ‘Best Cigars of 2018’ lists amongst the cigar enthusiast blogosphere. Now as the end of 2019 is in sight, Crowned Heads is pleased to announce a limited edition follow-up to that original release, once again dedicated to the ‘Crowned Heads Court:’ “CHC Reserve XVIII Full Court Press LE 2019.”

CHC Reserve XVIII Full Court Press features the original CHC Reserve XVIII blend in a 5 7/8″ x 52 box-pressed vitola. The resulting smoking experience is a rich yet accessible medium bodied expression that exudes a multi-layered flavor profile with hallmark balance. “The idea came to me last May during the NBA playoffs,” commented Crowned Heads co-owner/ founder, Jon Huber. “Initially, I tossed the name out there somewhat as a corny double entendre, but the more I thought about it the more I liked the idea of releasing a box-pressed expression of CHC Reserve. Once I smoked the sample it was a no-brainer to go to production.”

This limited release cigar is manufactured at Tabacalera La Alianza, S.A. (Santiago, Dominican Republic) under the supervision of industry icon, Ernesto Perez-Carrillo. Production is limited to 1700 (12-count} boxes, i.e., 20,400 total cigars with a suggested retail price of $11.95 per cigar.