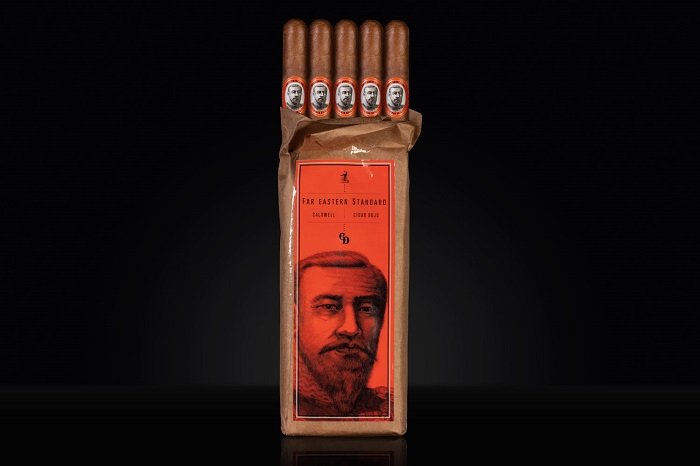 Spanning the period of 1867 to 1912, Japan was ruled by Emperor Meiji (aka Meiji the Great). During his reign, Meiji oversaw rapid progress for the Empire of Japan, transforming the country from an isolated and pre-industrial state into a dominant and respected power on the world stage. For this reason, Japan is often viewed in terms of “old Japan” (pre-Meiji) and “new Japan” (post-Meiji).

Such modernization is no stranger to Robert Caldwell and his Caldwell Cigar Company, which took the craft cigar world by storm in 2014, quickly filling the humidors of cigar fanatics with the likeness of a bearded fisherman named Hans Nielsen Lahkso. This cigar, known as Eastern Standard, helped pave the way for Caldwell’s unorthodox persona in the craft cigar space. With Cigar Dojo launching the world’s first and largest social cigar app in 2012, modernization of the once-archaic cigar industry has always been a principal objective.

Cigar Dojo’s penchant for Asian culture and Caldwell’s progressive character have been mashed, blended, and fused, materializing in the form of a 7″ x 40 lancero known as Far Eastern Standard. Paying tribute to the original Eastern Standard cigar—a longtime favorite of Cigar Dojo—the Far Eastern Standard showcases the hand-drawn likeness of Emperor Meiji. Far Eastern Standard marks the first-ever usage of the cult-favorite lancero vitola for a Cigar Dojo release—a format that is often praised for offering a concentrated and elegant smoking character. In addition, the thin ring gauge allows for added influence from the blend’s wrapper ingredient—a Colorado-shade Nicaraguan Habano leaf. This leaf is backed by an Indonesian binder and fillers of both Nicaragua (Habano) and the Dominican Republic (Piloto Cubano).

“I was very excited to take part in this collaboration with Dojo,” commented Robert Caldwell, owner of Caldwell Cigar Co. “We wanted to put together a product that would really be top-notch. This cigar is a cigar that I have been smoking almost every day since we first blended it. It really is my perfect cigar. It’s medium-bodied, rich, creamy, smooth and balanced.”

As a final touch, Far Eastern Standard has been packaged directly following the rolling process at the Tabacalera William Ventura factory in the Dominican Republic. During the cigar’s testing phases, the freshly rolled cigars performed so well that the decision was made to allow cigar hobbyists the same experience. This adds a slight punch to the otherwise medium-bodied profile of the Far Eastern Standard, showcasing a thick smoking texture and deep flavors of hazelnut, white pepper, heavy cream, caramel, and vanilla-mint throughout the finish.

Eric Guttormson, owner of Cigar Dojo, added, “We have been hoping to do a lancero for a long time and Robert nailed the perfect blend combination with this Far Eastern Standard. This cigar oozes tons of flavor and has instant-classic written all over it.”

Far Eastern Standard is being released exclusively through Cigar Dojo retail partner Smoke Inn Cigars. This includes a pre-release party at Smoke Inn’s flagship Boynton Beach location on November 6th at 7pm. Both Robert Caldwell and the Cigar Dojo team will be in attendance.