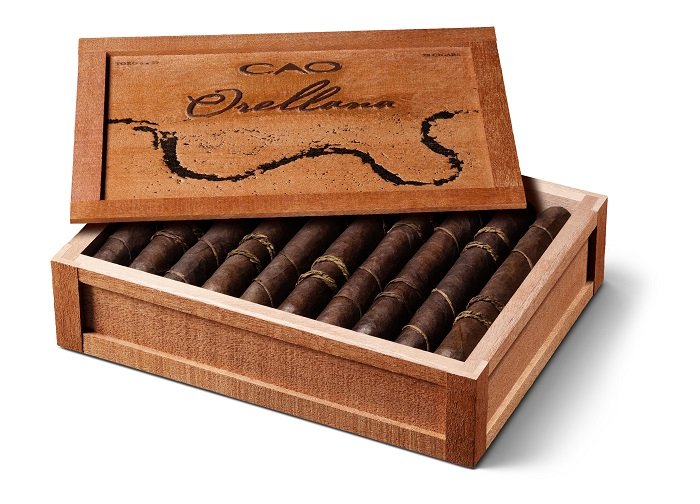 The CAO Amazon series is an expedition that began with Amazon Basin, a blend made with an exotic filler tobacco called Bragança from the wilds of the rainforest. The series continued on its path of discovery with Fuma em Corda and Anaconda, each featuring rare Amazonian tobaccos.
Today, CAO celebrates its ongoing quest for discovery with a limited-edition blend called CAO Orellana, marking the fourth release in the brand’s famed Amazon series.

Orellana is named in tribute to Francisco de Orellana, the first European explorer to navigate the entire Amazon river.

Long before the Amazon series debuted in 2014, a rich Brazilian wrapper aged patiently, waiting to be brought out from the shadows. This is the wrapper that adorns CAO Orellana and it’s called Cubra.

The sungrown Cubra was raised in a microclimate of Eastern Brazil’s fertile Bahia region. There, a collective of local farmers worked with CAO’s agronomists to yield lustrous leaves that are inherently sweet, strong and versatile for blending. Only the highest primings of Cubra were selected for curing in climate-controlled curing barns in Calfriza, where the wrapper’s deep red hue and natural sweetness further developed.

Rick Rodriguez said, “When I found the bales of Cubra, I knew that I wanted to blend it with some of the tobaccos from the previous Amazon releases. Hands down, Cubra wrapper was one of the best tobaccos I’ve ever used in blending. It has that Havano flavor with a little bit sweetness and it pairs really well with other tobaccos. I think Orellana is going to be a big hit with the fans of CAO.”
To create Orellana, Rick and the team blended the Cubra wrapper with Amazonian Bragança, Colombian and Dominican filler and a Nicaraguan binder. The result is an intriguing, full-bodied smoke, peppered with spice, hints of molasses and dried fruit with notes of leather and toasted nuts.

CAO Orellana is a limited-edition release handcrafted by the CAO artisans in Esteli, Nicaragua. It comes in one size, a 6” x 52 toro that will sell for a suggested retail price of $10.99 per cigar. CAO Orellana will be presented in rustic wooden boxes containing 20 cigars and will ship to retailers on October 1.