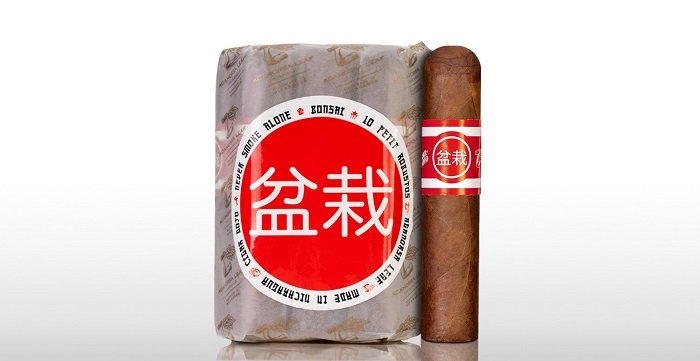 DENVER, CO (August 14, 2019) — Following in the footsteps of Cigar Dojo and Aganorsa Leaf’s highly rated ReviveR project, the two have collaborated once more to introduce the limited-edition Bonsai.

Marking the first small-form-factor project from Cigar Dojo, Bonsai draws inspiration from the Japanese art form of the same name. The technique—dating back over 1,000 years—showcases the cultivation of small trees in miniaturized landscapes, with the objective being to mimic the grandeur of their full-sized counterparts. Likewise, Bonsai boasts a unique, premium selection of tobaccos in a 4″ x 50 petit robusto vitola, bringing cigar enthusiasts a high-grade smoking experience in a surprisingly short and affordable format.

Working closely with Terence Reilly (Senior Vice President of Sales and Marketing for Aganorsa Leaf) and Max Fernández (Factory Manager and son of Eduardo Fernández), Bonsai was crafted from a range of AGANORSA-grown tobaccos throughout Nicaragua’s Jalapa and Estelí regions. This puro blend includes a Corojo ’99 wrapper harvested from Jalapa, a Corojo ’99 binder, and Criollo and Corojo fillers from both regions.

“Cigar Dojo makes cigars with the top manufacturers in the industry, so we know the bar is high if we want to live up to expectations. The Bonsai has excellent flavor and aroma, as well as an incredible price. We’re excited to see how DOJONATION responds to this special project,” commented Terence Reilly.

Despite Bonsai’s small stature, the cigars have been expertly crafted, allowing for surprisingly long smoking sessions. With a unique selection of AGANORSA tobaccos, the blend brings out meaty flavors of peppered toast, bacon, zesty clove and cinnamon spice, and chocolate graham crackers—all delivered through a medium to medium-plus body. Bonsai features unique packaging as well, where 10 cigars are bundled into a wheel shape, reminiscent of the storage practices seen at cigar
factories. These bundles feature Aganorsa Leaf-branded clear rice paper and an oversized Bonsai sticker, making for a unique, compact display.

Eric Guttormson, owner of Cigar Dojo, stated, “The Bonsai is the culmination of a year-long quest to produce the best small cigar we could possibly create. It’s the incredible AGANORSA tobacco that makes this possible, and we have no doubt that the Bonsai will surprise a lot of people.”

Bonsai cigars are set to debut at the 2019 Rocky Mountain Cigar Festival in Broomfield, Colorado on August 24, 2019. At the event, 50 Bonsai bundles will be available to all attendees. Additionally, the remaining 300 bundles will become available online on August 28th, sold through online retailer Payless Cigars & Pipes.