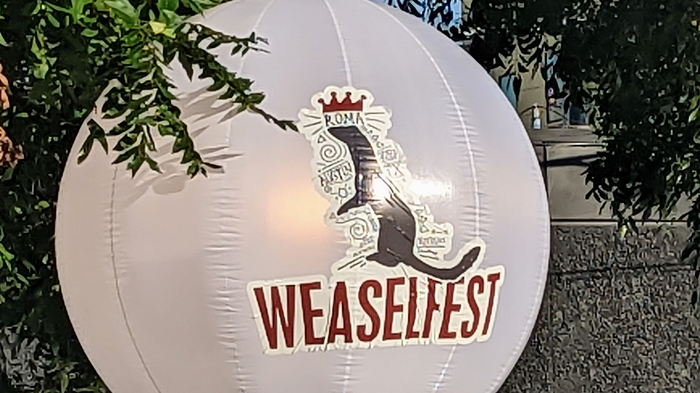 I can remember at the IPCPR 2019 in Las Vegas speaking at length at the Media House with one of the owners of RoMa Craft Tobac, Skip Martin, until the early morning. One of the topics of conversation was around the value of exhibiting at a tradeshow, and his desire to host a festival for the retailers and consumers of RoMa Craft. RoMa Craft decided not to return to the future PCA tradeshow and exited with one of the most epic tradeshow parties that has ever been thrown.

Fast forward to 2020 and the inaugural Weasel Fest was set to take place on September 5 at the RoMa Craft HQ in Austin. As they say: “when the shit goes down” you adapt and adjust.

Fast forward to 2021 and WeaselFest kicked off on the Memorial Day weekend in May. Despite my significant interest in attending, I remained unable to travel to the US.

When dates were announced for 2022, I knew I had to go, and I was eager to make up on two years of lost travel. I reached out to Mike Rosales to make sure I could secure the purchase of a VIP ticket. If I was traveling down from Canada, I was intending to do the event to its fullest extent, and that meant the VIP experience.

Skip Martin and Mike Rosales, being the generous people that they are, unexpectedly covered my VIP ticket.

Of course this means now I can’t say anything bad…

I don’t travel as much as people who are brand owners in the cigar industry, but I do travel enough that long ago I realized the value of getting my NEXUS card (trusted Traveler for the US).

I have a habit of booking the first flight out of the day, especially when I’m connecting. In my experience that tends to provide a bit of a buffer in case things go awry, which they often do. In this case everything was going along swimmingly until I had just sat down in my seat, and I was alerted that my connecting flight in Dallas had been canceled.

I hurriedly opened up my American Airlines app, hoping that I could quickly rebook my connection, and fortunately was able to do so just as we were pushing back from the terminal.

That was about it for travel related drama. For the flight to Dallas, the middle seat was vacant, which was a nice touch. The American Airlines app tracked my baggage, which also left me feeling confident when I saw it had been loaded onto my new connecting flight. My flight to Austin also had a vacant middle seat. Everything was coming up Millhouse.

I haven’t been to Austin since 2014, my last cigar festival experience. Austin has changed significantly. Although the core of ‘Keep Austin Weird’ is still intact, the city has grown to a staggering degree, and with it has come big city issues, not the least of which is traffic and sprawl.

That wasn’t more apparent when I browsed hotel options and saw pricing that was approaching Miami levels. Being the ‘thrifty’ traveler that I was, I opted for an Airbnb stay which would only cost me 1-1/2 days equivalent hotel stay for the full four day trip.

I dropped my baggage off at the Airbnb and Skip Martin was generous enough to swing by and take me for some grub, and a tour of the RoMa Craft HQ.

After not eating since 4am that morning, I was getting pretty hangry, and Texas Chili Parlor was exactly what the doctor ordered. Skip recommended the Frito Pie, and a local Austin beer, and it did not disappoint.

Walking through the RoMa Craft Headquarters, if you are paying attention, you would learn a lot about the owners and how they operate. ‘Attention to detail’ is not just a philosophy, but it’s clearly the driving principle behind everything they do. You can see it represented in all the little details, and that no one who works here is satisfied with the status quo. Everything goes in its place. 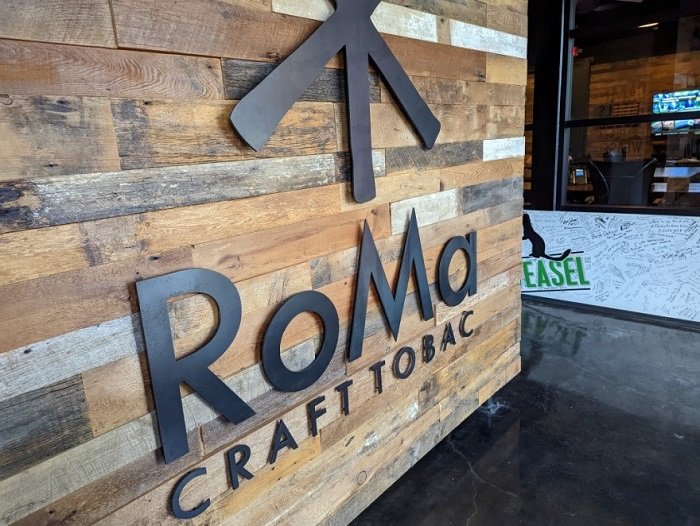 We smoked and we chatted. We chatted and we smoked. After we had settled in, Mike Rosales showed off their extensive bourbon collection. As somewhat of a collector myself, it was quite impressive.

I’m not sure how long we chatted and smoked, and I did my best to do some damage on their bourbon, but it was well into the early morning.

Skip, aka Uber Black, was kind enough to drop me off at my AirBnb so I could recharge for Friday. I knew Friday night was going to be another long one.

After doing some touring of Austin coffee shops, cigar shops, barbeque places, I headed back over to the RoMa Craft HQ as I knew that a number of VIP attendees would be showing up on Friday.

The HQ was already full of people by the time I arrived. I settled in, made introductions, and we smoked and chatted and again tried to make a dent in the extensive bourbon collection.

If you haven’t heard me gripe about the fact we can’t smoke indoors anywhere in Canada, I’ll certainly spare you in the article. Suffice it to say, Smokers Abbey was a really great way to spend the evening and going into the humidor was pretty exciting.

I enjoyed the time spent chatting with other attendees, and making new friends.

The VIP experience officially started with an invite to the home of Mike and Jamie Rosales. Mike and I had already spent a great deal of time nerding out about high end coffee set ups, and Mike was playing barista to all in attendance.

I thought it was very generous of them to open up their home to cigar reprobates. It was a great breakfast experience and some great coffee. Of course more cigars and socializing took place before our next stop at The Range at Austin.

Yes, believe it or not the Canadian enjoys shooting firearms. I’m from the province up here colloquially referred to as the “Texas of Canada”.

The range was quite impressive, and shooting a handgun and a pretty impressive shotgun certainly scratched the itch. 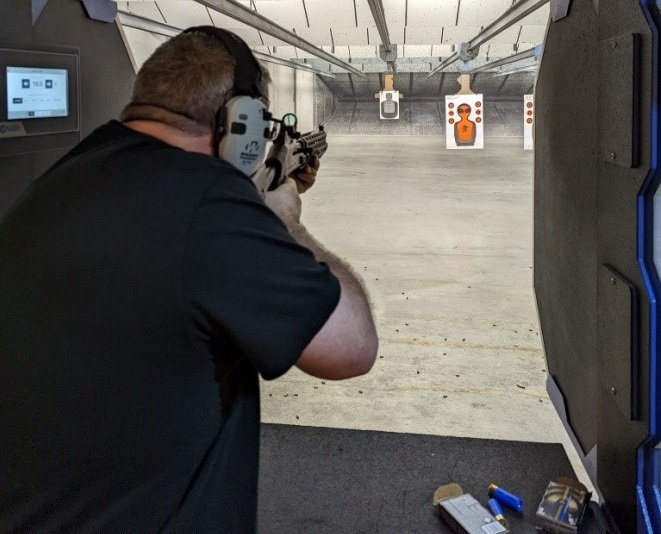 They also have an open air smoking area where the private range was, so after shooting there was more of an opportunity to have cigars and continue to socialize.

As an Albertan, I do pride myself on our quality of beef and steak houses, but it was no question that Bob’s delivered on a stand out meal, great cocktails and excellent service. Of course, any chance for me to have a cigar and a meal together is something special and I settled in to enjoy it to the fullest.

I did spend some time practicing my poor Spanish skills, much to the amusement of the Spanish speakers at my table.

We departed from the restaurant and headed for another great evening at The Cigar Vault East. Decent seating on the inside and then a spacious area out back meant another long evening of smoking and socializing.

At this point I was beginning to grow concerned about the number of cigars I was acquiring and the inevitable ‘rubber glove’ treatment I was going to get upon my return to Canada.

The main event was very well organized. You grabbed your badge and ‘grab bag’ at the front and made your way inside for a cocktail before heading outside to the spacious and largely shaded seating area.

There was a great VIP section set up facing the main stage, and the intro acts put on a great performance. Music lineup was Rock Star DJ D-Money (pictured below), Mexstep, and Scarface & The Formaldehyde Funk Band. 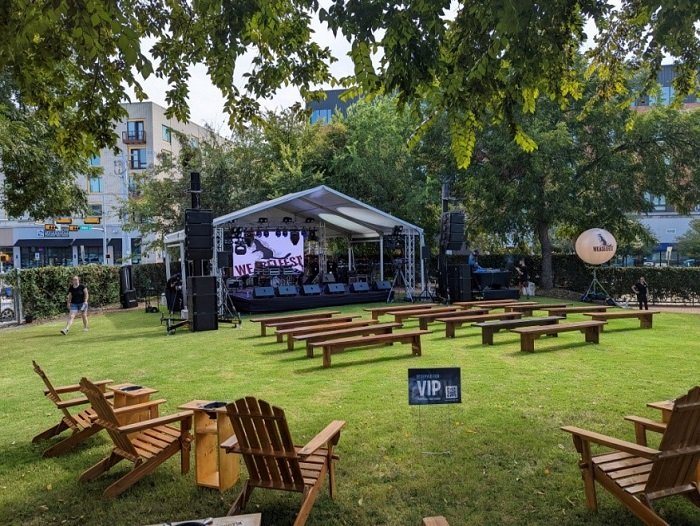 Back inside, the Weasels were clamoring at the swag and cigar counter to get their hands on the limited editions and various swag items that were available for purchase. Yours truly certainly took part as getting my hands on RoMa LEs is typically quite challenging.

The swag box for the VIP attendees was more than generous, and I’ve been making good use of the Stiles Switch rubs that were included several times a week on barbeque.

Desert Door Texas Sotol and the Garrison Brothers distillery were represented, and I was always very familiar with their lineup as a good friend had previously picked up some cask strength offerings and had them shipped up to Calgary. Zilker Brewing Company was providing craft beer, and under the afternoon heat it was both tasty and refreshing.

Stiles Switch was supplying the barbeque and it was outrageously tasty. It was ‘all you could eat’ but after that plate I was completely tapped out and settled in for the meat sweats. 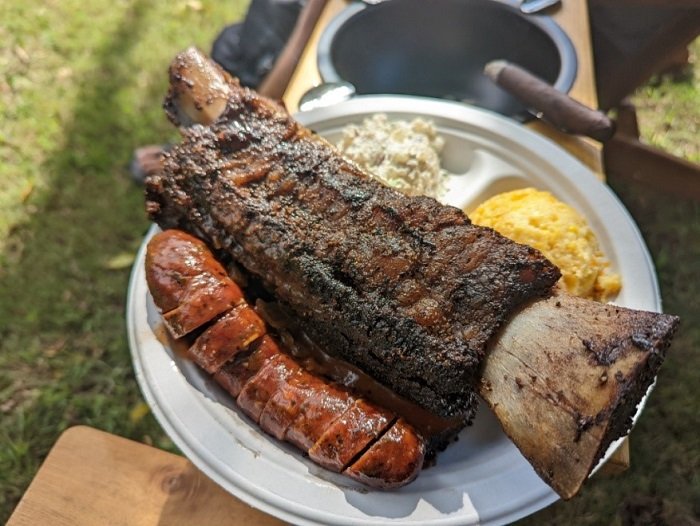 With some thunderstorms looming, the main event wrapped up and a significant number of attendees returned to the RoMa HQ to thoroughly test out their HVAC system. More damage was done to the bourbon collection, along with a minor impact on the extensive beer collection.

Shaking hands with Scarface was certainly one of the highlights of the event for me.

Returning to Canada after a cigar event is always an interesting experience. As a Canadian, you’re allowed 50 cigars duty free, and anything over that you have to navigate the gauntlet of tobacco taxes. It would be an understatement to say I was loaded down with cigars, so I was mentally prepared for a protracted interaction.

Luck was with me as I managed to sail through without any major engagements or damage to my credit card.

Listen man, if it isn’t apparent by now, I was already fully committed to returning in 2023 halfway through the weekend. If you’re a fan of RoMa Craft cigars, there’s really no reason you shouldn’t be attending either. The price for a standard ticket is less than the price of a box of cigars, and the value you get from that is clearly far beyond that.

I hope to see you there.