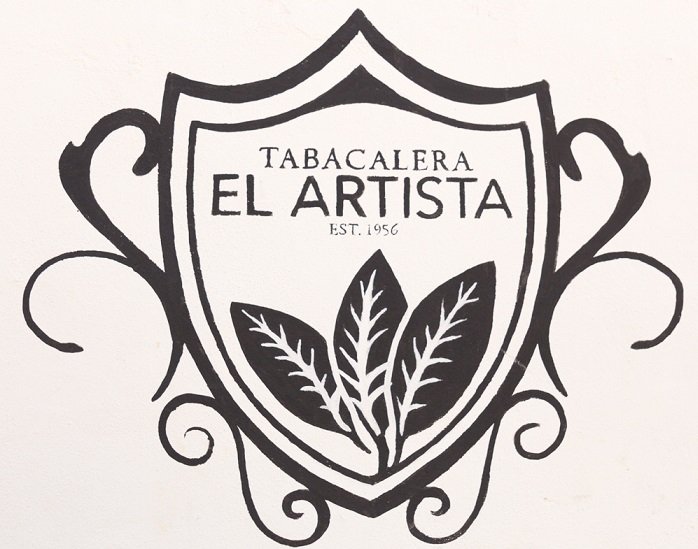 The Journey to El Artista – Day 1

The story of my journey to visit El Artista in the Dominican Republic starts very much in the same way that all my cigar journeys do; long plane rides. The unfortunate thing about living in the West of Canada is that a significant portion of my travel involves connecting to another city prior to my final destination. In this case it’s close to a 4 hour flight East before a 4+ hour flight to my final destination. The reason for this preamble is that it sets the stage for my customs experience in the Dominican.

I’ve also had my fair share of experience passing through the customs process of a significant number of countries. As is always the case after long flights, or multiple long flights, my normal friendly Canadian energy was replaced with only the bare minimum required of social etiquette. My customs experience was going swimmingly until we got to the section that detailed what address I would be staying at. Since there was some last minute shuffling of lodging, I had put the El Artista factory location as my final address. As my Spanish is still fairly basic, and really I should be at least at a level of semi-fluent by this point, I wasn’t able to adequately get across that the lodging address hadn’t been confirmed just yet. After some back and forth that tried most of the patience of the customs lady assisting me, she left me with an exchange in Spanish that amounted to a sarcastic “well have fun sleeping in a cigar factory”, to which I replied with “thank you, I definitely will”.

I collected my luggage, passed through the swarm of taxi drivers trying to insist on helping with my luggage, and headed outside to meet up with my driver Maché.

There is something quite wonderful about going from a below freezing Canadian winter environment and stepping into a hot and humid environment of any tropical climate.

My driver Maché arrived shortly after, and I did my best to make conversation in what little Spanish I could. One of the things that he asked me is whether I preferred we take the route via the coast, or the route via the mountains. I would not know until days later, but if I was looking to make the best possible impression I should have chosen the mountain route. My disconnect was that I have lived in a mountainous area for the majority of my life, so driving through mountains is a pretty routine experience. The coast is part of the reason I’m traveling to a warm country, and one of the great sights that help me transition into a relaxed travel head space.

I couldn’t tell you how long the drive was as Maché came well stocked with cigars which I happily enjoyed on our way to Santiago De Los Caballeros (Santiago).

For me, the coastal scenery was exactly what I needed to leave all the concerns of Canada behind, if only for a short while, and focus on tobacco.

Checking into the house

We arrived at the house, which I would certainly describe as mansion sized, and as I had the good fortune to be the first arrival I had shotgun rules on the bedroom options. The patio smoking area was well designed, comfortable and very spacious. We would later spend most of our evenings smoking and having long conversations.

Ram came by and we went out to the Cigar Bar Rancho Steak House to have a cigar, a beverage and some appetizers. Later we were to swing by the Santiago airport to pick up the remainder of the media group who were flying in quite late at night. I also got to spend more time talking with Kevin Newman, Director of Sales and Marketing, who I had met for brief moments at the IPCPR trade show, and through email.

We all gathered and returned back to the house to settle on the aforementioned patio area for a cigar, some great conversation and a rum … or three. 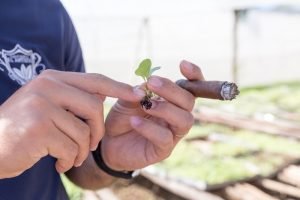 The amount of detail that we went into was impressive. From plant genetics, leaf classification, preferred soil type for each Dominican tobacco varietal, along with the challenges they face in cultivation. As with many tobacco farms, the primary target is wrapper tobacco. Wrapper tobacco is significantly more expensive than filler, and because the leaf has to be visually near flawless, it’s always a challenge.

We also had the opportunity to visit the box factory. For me, it was quite interesting as I’ve only been exposed to a small part of cigar box making, and this gave me a chance to ask technical questions to get a better understanding. The box factory operates as its own entity.

We visited one of the many El Artista fermentation areas. Ram talked about how the aromas always bring him good memories of his father. We also talked about machine made cigars and the tobacco that is set aside for that process.

One of the days great experiences was going through tobacco component tasting with Ram. He picked some of the common tobacco types used in Dominican cigar blending, and walked us up through the flavor and strength chart. 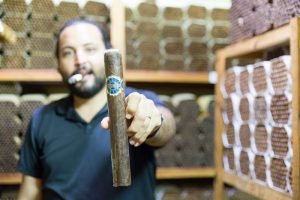 On the second day we focused on El Artista. Ram took us through the history of the company, dating back to 1956. From there, he stepped us through some of the difficulties the DR faced in the 80’s with cigar production. In the 1990’s they started exporting to the United States. Today they are expanding worldwide.

Buffalo Ten was a hot launch product for El Artista, becoming 20% of their sales in the first months after launching at the PCA/IPCPR trade show. Skipping the box process allowed them to cut costs, complexity and focus their energy on blending.

In the aging room they have cigars dating back as far as 2015. An interesting thing about the factory, they’re Kosher Certified. A Rabbi flew in and went through the process to ensure that the factory was Kosher for a client that El Artista makes cigars for. I’m sure that I’ve never personally heard of another factory that has gone through that, and I found it fascinating.

That evening we were treated to a very special home cooked meal, along with Ram’s mother and a number of people from El Artista. I also had the opportunity to learn dominoes, which had been on my bucket list for some time.

After some intense tobacco knowledge it was time to enjoy some of the culture and splendor of the Dominican countryside. We took a long trip east to Playa Cayacoa. This was largely for some beach time, food culture, Dominican culture and to see more of the country than just the surrounding areas of Santiago.

The coast was beautiful, and the beach we visited was very much worth the trip. Part of the experience was a visit through a marble quarry, which checked a new box for me.

An overnight stay and then we returned to Santiago to experience some fine dining.

On the way back we stopped at a very out of the way restaurant called El Cabito, which I believe had been visited by Anthony Bourdain during his No Reservations TV series. The paella overlooking the coast was a very memorable experience.

The Opéra Restaurant provided some late night dining and cigar pairing, with an amazing chef who utilized tobacco leaves as a part of the dinner preparation.

Since I had a connection on the return, I did my best to ensure that I wasn’t over my duty free limit of cigars for Canada. That would prove to be the least of my concerns as I was pulled aside by customs in the Dominican Republic to explain what the cigar mold I had been graciously gifted was. After I explained the function of it, there were smiles all around. The experience ended up being similar in Toronto, but with less smiling and more apologizing.

I hope you enjoyed my recap. The notes I wrote down regarding tobacco, growing conditions, soil science and other technical details, I struggled to fit into the article in an engaging way. Ultimately, I abandoned them as I didn’t feel that I could do justice to the information in an interesting way. Overall, it was a great experience, and I appreciated that part of it involved food, culture and getting to know the Dominican Republic better.